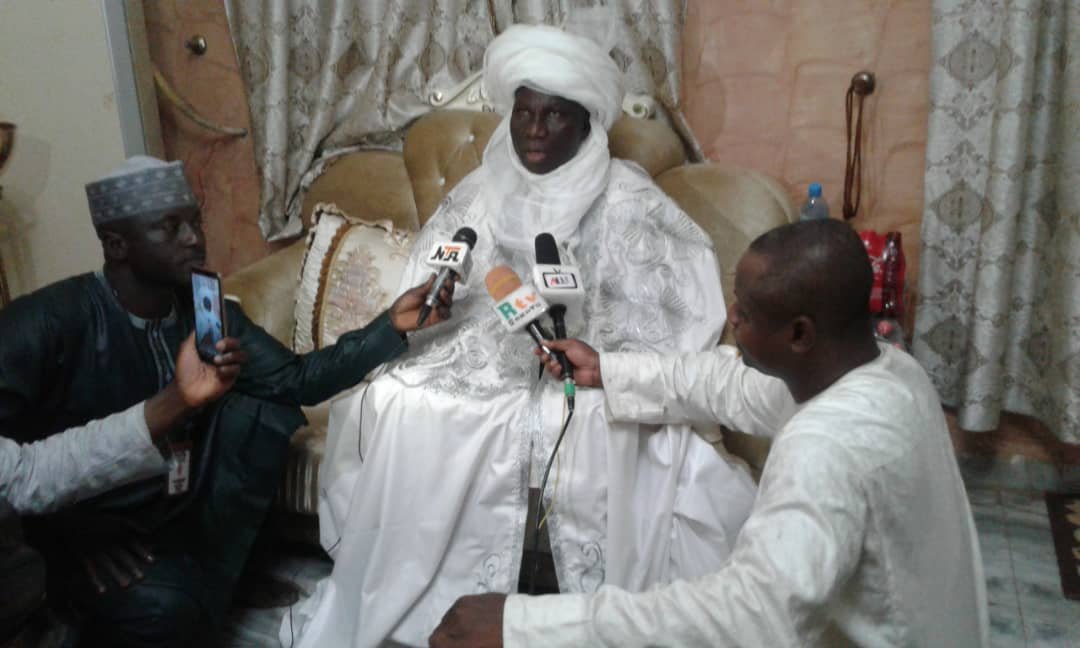 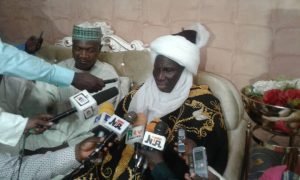 The Making of Quintessential Sani Dododo as 1st Tambarin Gwandu

In world history, everything once happened for the first time, not just talking about inventing the computer, but about the first selfie, the first Rockefeller Center Christmas tree, and the first rights to drive a motorcycle for a woman. Someday our great-grandchildren will look at photos of the hadron collider or the first 3D printer and wonder how they were invented so long ago! In the last point, you will see the pearl of the collection.Founded in the sixteenth century by the Kabbawa, a Hausa-speaking people, Gwandu today acts as one of the four Emirates composing Kebbi State. The town became important during the Fulani jihad, and from 1815 it was one of the two capitals of the Fulani empire until it came under British control in 1903. 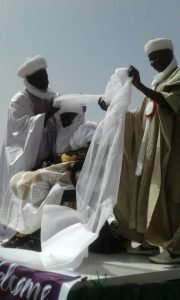 Gwandu is the second most important city in the history of Islam in the 19th Century West Africa.  Abdullahi bin Fodiyo, the younger brother to Shehu Usmanu was, before the conquest of Birnin Kebbi from the Kabawa, the Grand Wazir (Prime Minister) of the Caliphate. After 1809, the Caliphate was divided into two major parts for administrative expediency. The western part, from Gwandu to Ilorin, was under the control of Abdullahi and the Eastern part, from Sokoto to Adamawa under the control of Muhammad Bello.Since then, the Emirate of Gwandu and its subsequent Emirs, continue to contribute in the realization and sustenance of the ideals and legacies upon which, the egalitarian Caliphate of Sokoto was founded. Therefore, the appropriate positioning of the history of this great, historic, as well as political and spiritual  centre (Gwandu Emirate) in the annals of Nigerian history is indispensable.

History was therefore happily recorded in the Gwandu Emirate Council, Kebbi State, on Saturday, February 29,2020, nine illustrious Sons of the Emirate wjo have excelled in their various  fields of human endeavour were turbanned with their invaluable and enviable Traditional Tittles, sequel to the conferment of these highly cherishing titles by the Emir of Gwandu, Alhaji Muhammadu Ilyasu Bashar, a retired Major General. Indeed, on that epoch-making day, all roads led to the Palace of the Chairman of the Kebbi State Council of Traditional Rulers and Cheifs , as Birnin Kebbi , the State Capital , as well as the entire state was agog , in honour of the installation of the newest members of the Council in the State .

In fact , Birnin Kebbi literally stood still in their  honour, especially the FIRST EVER Tambarin Gwandu, a Pacesetter and Trail blazer , Alhaji Sani Mallam Garba, popularly known within and outside Nigeria as Alhaji Sani Dododo. Tambari, the identity of the Emir signifies the prestige and integrity of the Emir as potrayed by the Royal Drum. Dododo, the 1st Tambarin Gwandu attests to his impeccable integrity as the purveyor of good leadership , whenever he speaks out, where leaders are present . He is indeed an Iconic and astute Politician, a seasoned Technocrat, a Philanthropist par excellence, an unassuming human being , a humane character and a committed family man-cum a successful Activist,  as well as the most Media friendly politician.

Certainly,  the popularity of Dododo tangibly came to the fore on that history day , the days proceeding it and others that followed it. The drums were rolled out by various groups and individuals , as the retinue of guests who thronged the Abdullahin Gwandu Palace and the residences of the 1st Tambarin Gwandu were countless , highly placed and they cut across various strata of statuses in the country , and beyond the shores of Nigeria . There were guests who wanted to be part of history making from various parts of Kebbi State,  Nigeria and beyond . They came from far and near , irrespective of gender , age, political, ethnic or religious affiliations .

All were echoing Dododo, Dododo, a La ceaselessly. It was really pomp and celebrations when the Pioneer Tambarin Gwandu was installed and unveiled to the admiration of the myriad of Guests  who came from across Nigeria, Niger , Benin and Ghana Republics, among others . They ranged from top politicians, retired and srrvjng civil srvsnts , members of the Diplomatic Corps, clerics , the Ulamas and the members of the business community , et al. The extremely successful occasion was presided by the Emir , assisted by the Indefatigable Governor of the state,  Senator Abubakar Atiku Bagudu, himself the unparalleled Matawallen Gwandu , an elder statesman and an Iconic veteran Technocrat

The Emir of Gwandu, whose joy knew no bounds , said during the heart warming event that , the new blue blooded Traditional Title holders were bestowed with the titles in recognition of their outstanding innumerable contributions to their various communities,  Gwandu Emirate, Kebbi State, Nigeria and the entire world  at large . Alhaji Ilyasu Bashar who was visibly elated averred that , they were conferred with the titles based on merit. The Emir who congratulated the conferees , admonished the new title holders to sustain the tempo of their unequaled levels of commitment, patriotism  and dedication to their communities ,  humanity , Emirate Council , Kebbi State and Nigeria, as well as the entire globe.

He also stressed the need for all Nigerians to continue to collectively strive to make Nigeria more secure , united and socioeconomically prosperous. Alhaji Ilyasu Bashar further urged Nigerians to ensure that ,their children and wards acquired both western and religious education, even as he sermoned to Nigerians that , Islam is never opposed to western education, while it totally prohibits the killings of innocent souls , saying , ” it is unfortunate that some heinous elements were using the name of Islam to obnoxiously perpetrate the abhorrent killings of innocent citizens . They are doing nothing, but tarnishing the name of Islam . There is no religion that attaches great importance to education than Islam.”

Coming back to the 1st Tambarin Gwandu, myriad of testimonies were happily made that brought to the fore his ages-long life of exalted and illuminating service to humanity , his family , friends and Associates . He is indeed a Man of the People. These soothing testimonies were reeled out by the members of his immediate family, relatives , friends , School mates , colleagues and a horde of other well wishers .

They all poured encomiums on the Pioneer Tambarin Gwandu,  whom they all described as an easy going person , fearless , pious, philanthropic,  patriotic and above all, nothing , but an Epitome of Humility . He was also described as a person whose penchant for maintaining friendships , relationship bonds and any form of positive affinities, is unparalleled and unimaginable. They urged him to sustain the tempo,while calling on other Nigerians to emulate the Tambarin Gwandu, the now official ombudsman and spokesperson of the Gwandu Emirate Council . The new title is just an addition and booster to what he knows best to do , talking , information dissemination and persuasion . What a lucky Gwandu Emirate Council. ?

The list of all those who extolled the sterling qualities of the 1st Tambarin Gwandu is certainly inexhaustible . They included the First Lady, Wife of Governor Atiku Bagudu, Her Excellency , Hajiya Aisha Bagudu, an Ally and Mentor to Alhaji Sani Dododo, Senator Aliyu Magatakarda Wamakko, one of his Wives, the Tamabarar Tamabarin Gwandu, Dr Zainab Sani Dododo, an accomplished Medical Doctor, the Chairman of the Publicity Committee, Alhaji Umar Umar Gwadan Gwaji, a former General Manager of the Kebbi State Radio, the Chairman of the Kebbi State Civil Service Commission, Alhaji Abubakar Nayaya, Alhaji Abubakar Bala Kurfa , Alhaji Habibu Bala, Alhaji Abbas Rabiu Kamba and Alhaji Babangida Abubakar aka Pele, among several other friends , classmates , Associates and a horde of well wishers .

The Wife of the Governor , Hajiya Aisha Bagudu, who came calling , could not hide her joy . She described Alhaji Sani Dododo as an elder Brother ,even as she expressed gratitude to the Almighty Allah for witnessing the historic moment . According to her , the tittle bestowed on Dododo is just an additional responsibility to the retinue of activities he routinely successfully, dutifully and diligently , routinely discharge . The First Lady said, ” he is a man of the people , he is outspoken and freely speaks his mind and I am sure he will live above board .”

Senator Wamakko, who spoke through the leader of a four-man high powered delegation he sent to the historic event, Alhaji Muhammadu Gidado, the Ubankasar Gidan Bubu, Wamakko Local Government in Sokoto State, described the celebrant as an honest , trustworthy and patriotic person.

The testimony from his closest Ally and Confidant , his wife , Dr Zainab Sani Dododo , the Tambarar Tambarin Gwandu, also expressed gratitude to the Almighty Allah for the numerous invaluable and cherishable honours,as well as favours he has done to them. Though she was earlier reluctant to speak on the qualities of her husband, insisting that others should blow his trumpet , to avoid self praise , Dr Dododo said ,” he is a good person , a man of the people and a benefactor , par excellence. ”

The 62-year old 1st Tambarin Gwandu, a committed husband of four lovely wives and a father of no fewer than twenty one handsome and lovely children, as well a grandpa to two awesome grand children, expreseed immense gratitude to the Almighty Allah for sparing his life to witness the epoch-making day . He was also full of praises to the Emir of Gwandu for finding him worthy of the highly reverred and cherished tittle in the legendary Gwandu Emirate, which is the second in the hierarchy in the Sokoto Caliphate .

” I am already versatile which a range of formidable issues In the Emirate like those on education , health , politics and I will leverage on this and come up with plausible strategies to routinely effectively disseminate the weekly meeting of the Emir and all tittle holders like myself to the public using the conventional and social media.” I will also serve as a Laiason between the State Government and the Emirate .” ” I always try to assist the less privileged persons because of my humble background as a person who comes from a very poor family and I know what it means to lack , while I know where and how poverty pinches ,” the Tambarin Gwandu, further averred .

Indeed , history has been made with the installation of ” Baki Abin Magana,” Alhaji Sani Dododo, as the 1st Tambarin Gwandu. His name has been written in gold in the annals of history of the Gwandu Emirate Council, Kebbi State and Nigeria, in general . CONGRATULATIONS the Tambarin Gwandu, Allah ya ja Jamanin Sarki Ya kuma Taya Riko. Ameeen.