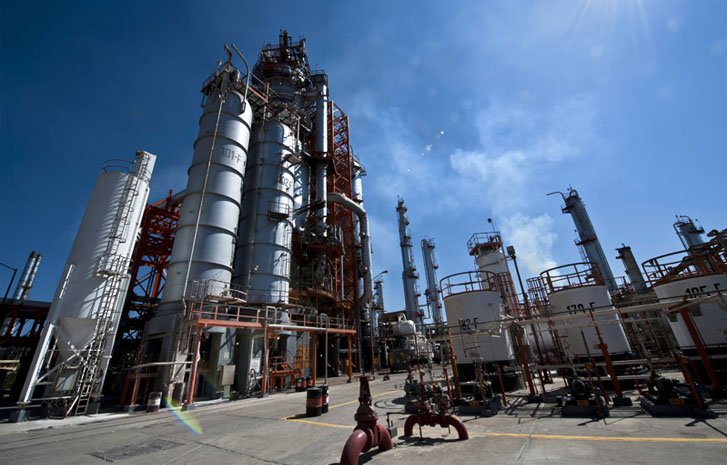 I don’t know about you, but I would say one of the most iconic images of the Buhari administration so far is the one released to the media on Monday, November 4. President Muhammadu Buhari — with a Hausa cap sitting comfortably on his head, a green pen in his right hand and a grin on his face — is seen appending his signature to the amended Deep Offshore and Inland Basin Production Sharing Contract (DOIBPSC) somewhere in London. Bent over by Buhari’s side was Mallam Abba Kyari, his chief of staff, whom I needed some forensic help to identify because he was not wearing his trademark red cap and white flowing gown; rather, he was in suit and cardigan.

Typical of us in Nigeria, we have been discussing everything about the event apart from the significance of it: that Buhari has finally broken a major stranglehold of multinational oil companies on this country. To the uninitiated, I will make the narrative as simple as possible. In 1993, we entered into deep offshore production sharing contracts (PSCs) with multinational oil companies. Because deep offshore was a new thing and it was going to be expensive to explore, we decided to offer very attractive incentives to the companies to encourage them to invest in the fields. It certainly made sense: the technology was expensive and success was not assured.

We decided that if they hit oil beyond 1000 meters, they would not pay any royalty. But they would pay royalty in various percentages for oil explored between 100 meters and before 1000 meters. They would also pay a flat 10% royalty for oil found in the inland basin. There were other juicy incentives in form of lower rate of petroleum profit tax, compared to joint venture partnerships; profit oil split; investment allowance; and cost recovery limits. The long and short of it all is that fortune smiled on the “contractors” and they hit oil earlier than expected. Technology had also improved along the line to make life easier for them. In no time, they started smiling to the bank.

In March 1999, we decided to make a law on PSCs in Nigeria’s deep offshore and inland basin — so that they are not just contracts but covered in our legal statutes as well. We said if crude oil price went as high as $20 per barrel, the terms of the PSCs would be reviewed. We projected that at $20, their costs would be reasonably recovered and Nigeria should therefore sip more from the juice. We also said even if oil did not hit $20, the terms should still be reviewed after 10 years and every five years thereafter — in a way “economically beneficial” to Nigeria. So simple and straightforward, in black and white! Commencement date was 1993 when the first PSCs were signed.

You know what? Less than two months after making the law in 1999, we mysteriously amended it and moved the threshold from 10 years to 15 years! That is the kind of hold the oil companies have on us — of course, with the full help and collaboration of Nigerians. When 15 years arrived in 2008, the terms were not reviewed, even though crude oil was already selling for over $90 per barrel. At a point, the “contractors” was taking 80% of the deep offshore oil and while the Nigerian National Petroleum Corporation (NNPC) got just 20%. We were not bothered: those who should defend the national interest were more interested in what-have-you.

The Department of Petroleum Resources (DPR), the industry regulator, actually wrote a letter to the oil companies in 2007 informing them of the 2008 timeline for the review, but that was all about it. The national assembly looked the other way. Everything went quiet thereafter. For a law that had automatic triggers — both in timelines and oil price benchmarks — it is incredible that we did nothing for so long. Why? Your guess is as bad as mine. Nigeria’s decision makers and political influencers always kowtow to them at the snap of a finger. We have to blame our own people in any case. But someone somewhere was going to break the spell one day. It was inevitable.

I am, therefore, amazed to be hearing some murmuring from even Nigerians that the new law would discourage investment in deep offshore and that the oil companies would move to other countries in protest. Really? This is very difficult for me to understand. There was a law that should have been implemented since 2008. This law was ignored by every government for whatever reason. Nigeria lost billions of dollars as a result: an estimate puts the short payment at $62 billion in the last 11 years, but a moderate figure would be between $1.6 billion and $2.8 billion per year. How can we be blaming ourselves for implementing our own laws? I honestly cannot understand this.

As for the threat that the oil companies will get angry and leave our shores simply because we decided to make the necessary adjustments to the PSC terms as provided for in the law, I believe that would be an over-reaction. But for the lack of visionary leadership which has plagued Nigeria for decades, shouldn’t we be doing the exploration by ourselves — 63 years after discovering oil? Isn’t it an indictment on us that we are afraid that the big oil companies would angrily leave our shores (or offshore) and we would be left naked? Why should we be afraid to review the PSC terms under which they were engaged for deep offshore exploration in the first place?

Actually, we should be ashamed of ourselves for our legendary incompetence. In the 1970s, three countries — Nigeria, Norway and Malaysia — decided to set up national oil companies to engage in exploration, production and refining. Nigeria created the NNPC, Norway Statoil and Malaysia Petronas. Today, Statoil, now renamed Equinor ASA, and Petronas are among the biggest state-owned oil and gas companies in the world. Equinor ASA and Petronas declare profits in billions of dollars and are among the most valuable companies in the world. Equinor ASA operates in 36 countries; Petronas 35 countries. And our own NNPC? Please don’t get me started this morning!

If NNPC had not been operating as a scam centre for decades, we would not be batting an eyelash over any oil company threatening to exit Nigeria because of the reviewed PSC terms. Unfortunately, when we decided to empower Nigerian entrepreneurs to play big in the upstream sector of the oil industry, our renowned “greed is good” disposition and mismanagement malady expectedly took the centre stage. Some of the so-called entrepreneurs were busy frolicking with the Naomi Campbells and Atlanta celebrities, accumulating private jets like toys, partying in $80 million yachts, rendezvousing in $35 million penthouses and what not. A fool and his money are soon parted.

The amendment of the law was a clinical coup by Buhari. The planning and execution was done in such a way that the oil companies did not have time to kill it or lobby it into coma at the national assembly. Kyari, apparently the arrowhead, is himself a former oilman, so he knows one or two things about the politics of the industry. The guile and determination were such that the amendment was passed by both legislative chambers within 21 days. This again confirms my pet theory — that if Nigerian politicians decide to do something, nothing can stop them. I wish this determination would always be applied to all the things that matter to Nigeria’s progress.

If there is a will, there is always a way. Let them now apply the same determination to healthcare, power, education and security. Above all, we need to start thinking strategically as a nation, to define our interests and to pursue them with one mind. We cannot be doing deals that are skewed against us. Only God knows how many agreements government officials have entered into ostensibly “in the national interest” but purely for personal benefit. Some agreements and laws need to be reviewed or renegotiated. Many government officials sign agreements or pass laws that are clearly hurtful to the public interest but they cannot be bothered. Their god is their stomach.