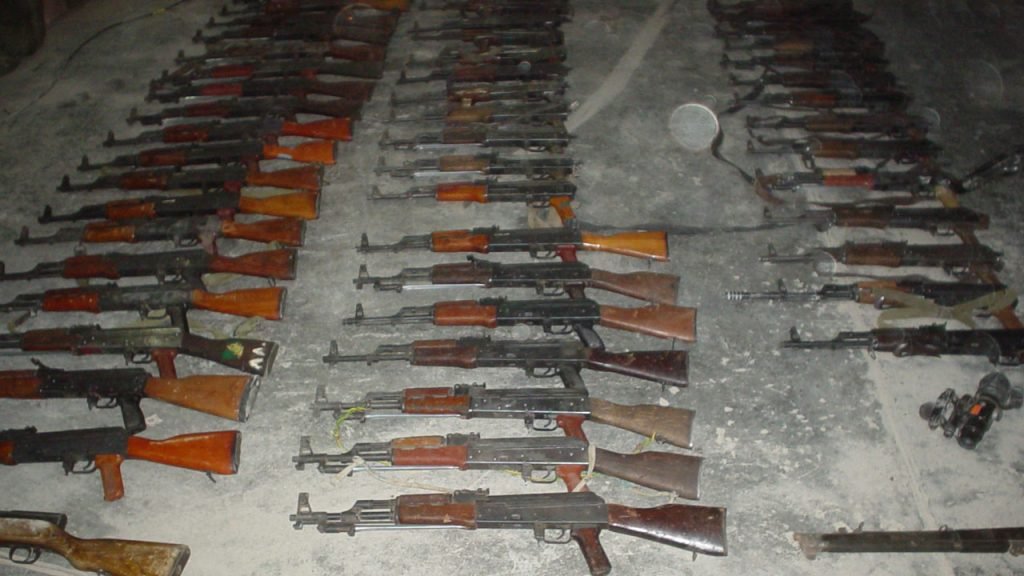 Monguno said this during the destruction of over 3,000 small arms recovered from across the country by the National Centre for the Control of Small Arms and Light Weapons (NCCSALW).
The arms were destroyed at the Nigerian Army Command Engineering Depot on Thursday in Kaduna.
Represented by Amb. Aminu Lawal, Director Policy and Strategy, Office of the NSA, Monguno said the proliferation of SALW was a major source of vulnerability in the society.
“It stood out as a key driver of violent conflict, crime and terrorism within and beyond Nigeria’s  borders,” he added.
The NSA noted that the failure of the global community to control the availability of illicit SALW had continued to undermine global peace and significantly hinder development, especially in sub-Saharan Africa. “We recognise the complexity of the challenge of controlling the proliferation of SALW in Nigeria and the requirement for concerted action between the government, international community and all well-meaning Civil Society Organisations.
“Nonetheless, we are resolved to galvanise our strengths and unity as a nation to confront this monstrous challenge and I am optimistic that we shall overcome it,” he said.
Monguno said that establishment of the Centre in 2021 by President Muhammadu Buhari was a historic step towards addressing the problem of small arms proliferation through an institutional platform.
He said that the Centre would structurally address all underlying contributors to the national security threat within the framework of the various international protocols and instruments to which Nigeria is committed.
“This action was also a demonstration of Nigeria’s commitment to the provisions of Article 24 of the ECOWAS Convention on SALW.
“Which requires all Member States to establish national commissions to promote a multilateral approach to stamping out unregulated or uncontrolled circulation of SALW in the sub-region.
Monguno further said that the weapons destruction was a practical expression to the months of hard work and sustained engagements with key stakeholders since the establishment of the centre.
“The government is working assiduously and engaging the NASS to ensure the expeditious passage of the bill establishing the Centre, to provide required legal framework to support a more robust discharge of the Centre’s mandate.”
He restated President Buhari’s commitment to providing necessary support to strengthen the Centre’s capacity to deal with the multifaceted challenges confronting it.
“This event today is a reminder to all Nigerians of our collective responsibility to support the security agencies and by extension the government in our fight to defeat criminality, terrorism, banditry and all forms of behaviours that threaten our national wellbeing.
“As we draw closer to the general elections, it is important that Nigerians continue to uphold our culture of peace.
“And resist overtures from those unpatriotic elements who have a penchant to heat up the polity and create a false sense of insecurity among our people during this season.
“We must eschew violence, shun political vigilantism and thuggery and discourage the proliferation of illicit SALW in all its forms as the government will bring the full weight of the law upon lawbreakers”, Monguno said.
He commended the centre for the successful operationalisation of its zonal offices across the country.
“I am confident that by this action, a robust framework has been established for effective grassroots impact in our quest for a whole-of-society effort to eradicate illicit SALW,” he added.
The NSA called on Nigerians to unite and work to protect the country’s peace, political stability,  socio-cultural harmony and democracy.
This, he said, was necessary to help government realise the vision of a safer Nigeria and to  promote the country’s socio-economic development.
Earlier, the National Coordinator of NCCSALW, retired Maj.-Gen. Abba Dikko, said the event was the first arms destruction exercise organised by the centre since its establishment.
Dikko said the key objective was to prevent captured illicit weapons from being recycled into the society.
He said it was also to meet Nigeria’s obligations on weapons destruction under various international instruments, promote transparency and contribute to the centre’s advocacy for an illicit arms-free society.
The national coordinator also said the exercise highlighted the dangers of excess, poorly secured, and illegal weapons, and the need to destroy them to reduce their proliferation and misuse.
“It also underscores the Nigerian Government’s commitment to transparent documentation and destruction of captured, surrendered and recovered illicit firearms,” he said.
Dikko said the Centre had made remarkable strides in its effort to establish a national SALW database to interface closely with the weapons databases of all security agencies in the country.
He disclosed that efforts had also reached advance stage to create robust database of all gunsmiths and related artisanal tradesmen in the country.
This, he said, was to establish the regulatory regime for their activities and integrate them into national weapon production architecture.
“The Centre notes with concern the growing prevalence of craft weapon production across the country and the contributory role it has continued to play in escalating the menace of illicit arms proliferation,” he said.
According to him, the centre has been engaging Nigeria’s Central African neighbours of Chad and Cameroon to stem the tide of cross-border arms trafficking.
He thanked the NSA, service chief, other security agencies and partners for their support to the realisation of the centre’s mandate.
NAN