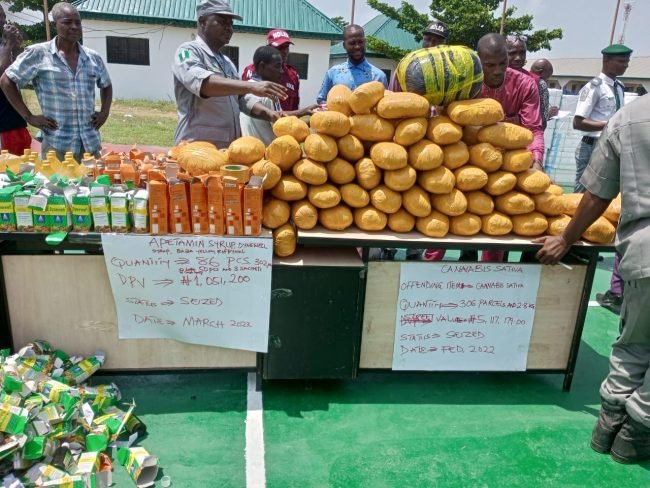 The Nigeria Customs Service (NCS), Seme Command, on Thursday, handed over tramadol, cannabis sativa and other drugs to the operatives of the National Drug Law Enforcement Agency (NDLEA) in Seme, Lagos State.

Jibo said the drugs were intercepted by the men of his command between January and May.

“In our quest to ensure the safety and well-being of Nigerians, most especially the fight against drug trafficking, today the command is handing over the items to NDLEA and NAFDAC.

“Others are three sachets of rofhymol, 32 cartons of fearless energy drinks and 139 cartons of soft drinks (expired).

“With the approval of Comptroller General of Customs, Col. Hammed Alli (rtd) in Line with the standard operating procedure and equally in the spirit of inter-agency, we have handed over the items to the two agencies,” he said.

“In another development, through the continuous surveillance of the beaches and creeks by our men, we have recorded another huge interception of 1,600 (30 litres) Jerry cans of petrol,” he said.

He said the product would be auctioned in line with standard operating procedure of perishable items.

“I appreciate the contribution of our stakeholders, host communities, other media friends for their unflinching support towards the successes so far achieved.

“I also thank the Comptroller General of Customs and the management for their support, guidance and motivation and also the gallant and patriotic officers of the command for their commitment to the progress of the nation,” he said.

Receiving the items, Mr Abubakar Wada, the Unit Commander of the NDLEA Seme command, said the hard drugs would be destroyed by the command.

Wada said the seizure would further reduce consumption of hard drugs by the people in the country.

He commended the Seme command of Customs for handing over the dangerous drugs to the command.