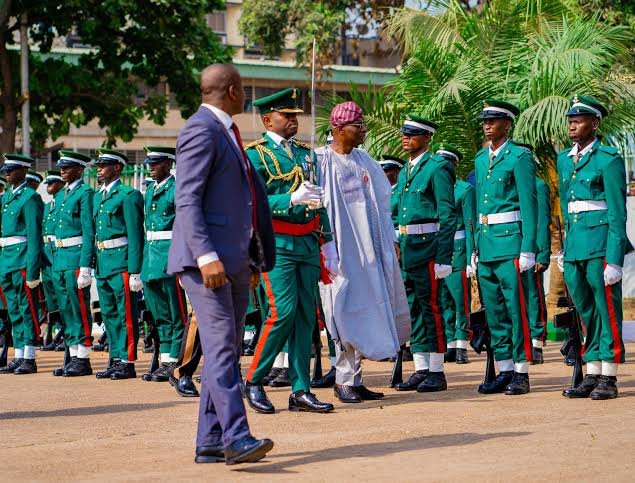 The Lagos State Governor, Mr Babajide Sanwo-Olu, on Sunday charged the citizens to ensure the unity of Nigeria.

The theme of the Service is: ”I will heal their land (2Chronicles 7:14)”, and was organised by the Lagos State Ministry of Home Affairs.

He said that the Nigerian Armed Forces had paid the supreme sacrifice with their lives, to ensure that Nigeria remained united, hence, citizens should ensure that their sacrifice is not in vain.

The governor commended the men and women of the Nigerian Armed Forces for their sacrifice and their daily efforts to keep the peace in different parts of the country.

”For those who had paid the supreme sacrifice with their lives, we honour their memories and it is our duty to ensure their labour will never be in vain by making sure we play our role in maintaining the unity of the country.

”I urge all citizens to always support our security forces as they work tirelessly to keep our country safe,” he said.

Sanwo-Olu said that the state government would continue to play its role and do what was expected in remembrance of the fallen heroes and heroines.

He said that his government would keep the tradition of ensuring that the relationship between the government, the residents and the Armed Forces continued to grow.

The governor also urged the citizens to support the security forces as they work tirelessly to keep the nation safe.

”As we keep the tradition of having this service to remember our fallen heroes and heroines that had paid the supreme price for this great nation, the government and people of Lagos State will continue that tradition.

”Today is for the remembrance of our fallen heroes and on behalf of the people and government, I want to thank all their families that are here.

“We assure them that government will continue to do what is expected of us to continue to remember them and to say that their efforts and commitments to the country are not in vain.

”We pray that our country will know peace; will know greatness. As we journey in 2022, the peace of the Lord which surpasses all understanding will rest with our country and our state.

In his sermon, the Executive Secretary, Lagos Anglican Schools Management Board, The Venerable Victor Olusa, said that the theme of the service was very relevant and appropriate to Nigeria’s situation.

Olusa said that people should endeavour to do the right thing and not to castigate their leaders.

He said people needed reorientation of values, as God was ready to heal Nigeria and Lagos State.

He added that Nigeria would rise again if all the citizens humble themselves, sought God’s face and turn from their evil ways.

The cleric also urged the Armed Forces not to give up or be discouraged, as they continued the war against insurgency, banditry and other forms of insecurity in different parts of the country.

The Commissioner for Home Affairs, Prince Anofiu Elegushi, commended the Armed Forces for upholding the existing unity in Nigeria and for their service to the nation.

Elegushi said that the government would continue to support the families of the fallen heroes financially and morally, giving them a sense of belonging.