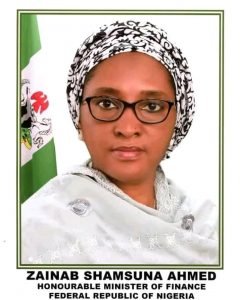 Finance Minister To RMAFC: Your Job Is To Monitor, Not Collect Revenue

The Honourable Minister of Finance, Budget and National Planning, Mrs Zainab Ahmed Shamsuna has restated the constitutional role of the Revenue Mobilisation, Allocation and Fiscal Commission (RMAFC), on the monitoring of accruals and disbursements of revenue from the Federation Account, pointing that the powers of the commission as constitutionally stated do not relate to collection of revenue by the Commission.

The Minister explained this during the Public Hearing on the Finance Bill 2021 before the Senate Committees on Finance, Custom, Excise & Tariff, and Trade and Investment, today, while responding to observations and recommendations to the Finance Bill by the RMFAC.

Highlighting provisions of the Constitution, the Minister noted that: “The functions of the Revenue Mobilisation, Allocation and Fiscal Commission is provided under Paragraph 32 (a-e) of Part 1 to the Third Schedule of the 1999 Constitution [of the Federal Republic of Nigeria].

“It is limited to the monitoring of the accruals to and disbursement of revenue from the Federation Account.

“The commission is also empowered to advise the Federal and State Governments on fiscal efficiency.

“There is no constitutional role provided to the RMAFC to collect revenues.

“We are only further empowering the FIRS to do what the law has mandated it to do, its constitutional role.” She stated.

Supporting the position of the Minister, the Executive Chairman of the Federal Inland Revenue Service (FIRS), Muhammad Nami stated that while in fact the mandate of the RMAFC was not exclusive, as the Budget Office, the Office of the Attorney General of the Federation, the Auditor General, among others have concurrent mandates to monitor, account for and audit revenues, only the FIRS has a sole mandate to collect and administer tax in Nigeria.

“Section 162(1) of 1999 constitution, suggests that the Federal Government is to maintain the Federal Account but that account is to be funded by four agencies of Government. These are: the Federal Inland Revenue Service, the Nigeria Custom, the Department of Petroleum Resources and the Nigeria National Petroleum Corporation.

“What the Federal Executive Council and RMAFC do with the money that four of us collect is not an issue for us because we do not have responsibility to directly monitor the disbursement of what we have collected.

“We are not aware of any provision that mandates the RMAFC to make daily, monthly or annual returns to the Federation Account.

“Section 80 of the Constitution of the Federal Republic of Nigeria also talks about maintaining a consolidated revenue account or fund.

“I want to remind us that RMAFC’s mandate remains monitoring revenue, particularly the operating surplus of Ministries, Departments and Agencies because RMAFC, to the best of our understanding, is not a revenue generating unit.

“The RMAFC Act Cap 17 LFN 2004 empowers them to demand and obtain regular and relevant information from NNPC, Nigeria Customs, FIRS, CBN and Federal Ministry of Finance.

“But that provision has not mandated RMAFC to take-over the roles of any or all of these agencies and the Federal Ministry of Finance. Monitoring is not the same as collecting and administering.

The Chairman of the Commission, Engineer Elias Mbam had raised objections to provisions of the Finance Bill 2021, claiming that the proposed amendments to the FIRS Establishment Act that states that the FIRS shall be the primary agency of the Federal Government responsible for the administration, assessment, collection, accounting and enforcement of taxes and levies due to the Federation and the Federal Government or any of its agencies, stating that this provisions “will infringe on the Commission’s constitutional mandate of monitoring accruals to and disbursement of revenue from the Federation Account as well as revenue payable into the Consolidated Revenue Fund of the Federation.”

He further added that the amendment would “foreclose or prevent RMAFC from monitoring tax revenue from FIRS.”