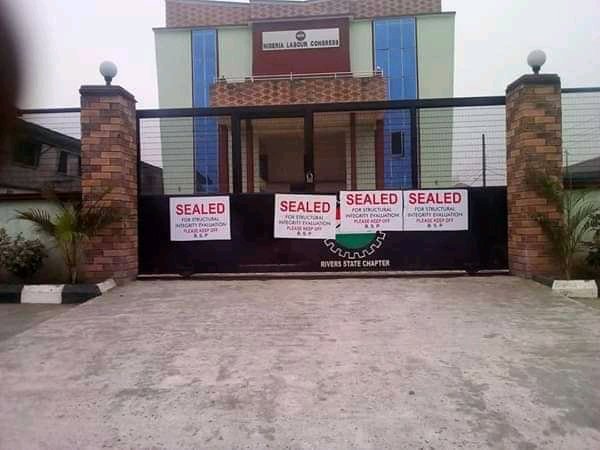 The Rivers State Government at about 10p.m on Sunday sealed the office of Nigeria Labor Congress (NLC), Rivers State over what it tagged “For Structural Integrity Evaluation, Please Keep Off”

The NLC Chairperson in the state, Comrade Beatrice Itubo confirmed this on her post last night

“Rivers state Govt seals NLC secretariat because Labour demanded the immediate reconvening of the minimum wage committee to address the issue of minimum wage. What will happen if an ultimatum is given, there is God o.” She stated.

“We asked them about we that are inside already and they replied that the order is that no one comes into the place and no one goes out” they said.

True Blue Reporters gathered that the security guards are now pleading for opportunity to go out and eat food at least.

Last week, Governor Nyesom Wike of Rivers State was said to have paid the state workers what he referred to as new minimum wage.

In a swift reaction, the state NLC in a press statement rejected the pay as new minimum wage and demanded for a negotiation table, saying it won’t further tolerate such.

In what looks like the State NLC was getting ready to dig it out with state government under Nyesom Wike, the NLC building that was donated and commissioned last year by Gov. Nyesom Wike was sealed preventing the union from gaining further entrance into the place.

Though, the governor is yet to react on the latest development, but it’s still not clear what will be the next action of the Union members in the state