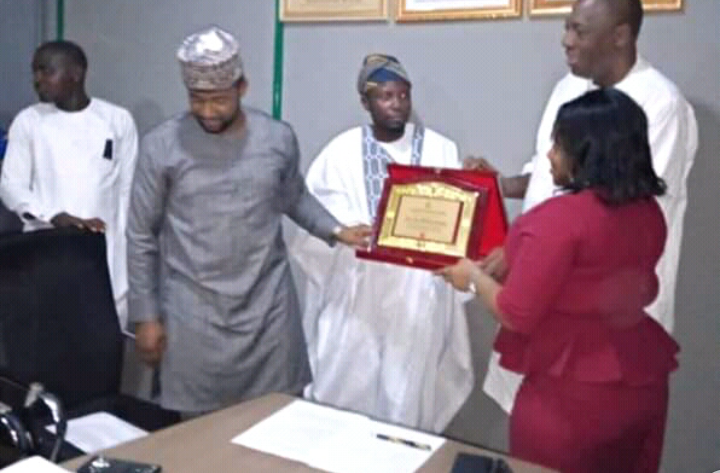 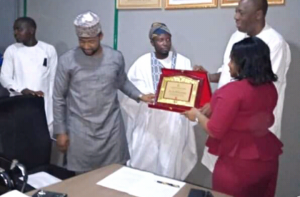 A youth movement under the auspices of Queen Amina Support Initiative has thrown its weight behind President Muhammadu Buhari’s giant developmental strides in the country. 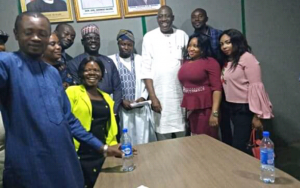 Founder of the group Queen Amina Ivey Ukula thanked the President for finding an illustrious Benue son in person of Senator George Akume worthy to serve in his administration. 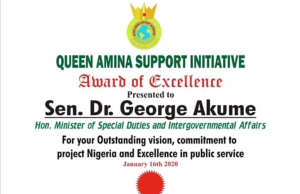 The group made this known during a courtesy call and award of honour to the Minister of Special Duties and Inter -governmental affairs.

According to her the three point agenda of Mr President – Security, Massive employment of human and non-human resources of Nigeria and the Fight of corruption where apt and most needed for the growth of the country.

She said the second term  of the president has further promoted unawering commitment to anti-graft war and massive infrastructure programmes with the attendants of employment generation .

” We are a group that has witnessed the rot and backwardness which the past corrupt regimes bought upon our dear nation,

“We have also been astute followers and witnesses to the immense attempt to correct this anomaly hoisted upon us by deliberate mischief from our past leaders,

“We are convinced beyond reasonable doubt that, the path to a safer tomorrow, the ground for massive employment of human and non-human resources of Nigeria has began its setting by this present administration,she said.

She applead to the Minister of special duties to use his good office to ensure youths were duly employed into different sectors to keep them away from social vices..

” we also have senior citizens in our group,those who have served in the civil service and have retired their wealth of knowledge and experience can be of immense assistance to your office.

The founder of the group encouraged the minister to develop more empowernent programmes for the teeming  youth as members of the group had different skills,trade and handwork and were in search for entrepreneur development programmes.

She said the initiative was made up of over 50,000 members across the country with massive online presence and social media and broadcast presence.

“We are a group that believes in the honesty, integrity and resourcefulness of our president,”she said.

In his response,the Honorable Minister,Senator George Akume who thanked the team,assured them of his open policy system of administration.

He reassured the team that issues boarded on security and employment where key and foremost in the PMB’s administration.

Akume promised to work closely with any initiative or organisation willing to help promote growth and development with those 3 point agenda of the president.

He also thanked president Buhari for restoring peace in Benue and the country at large.

The minister also advised youth to shun hate speech and the social media war initiated by the PDP in the state to ensure peace prevailed.

Akume promised to involve more youth and elders in programmes of the federal government for skills acquisition and other appointments.

He further said the team would be involved in employment  as issues of unemployment would be duly curbed.

Akume also thanked the group for the honour and  encouragement to serve with intergrity in the present administration.