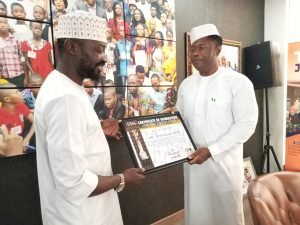 One of the presidential aspirants in the All Progressives Congress (APC) primary, Mr Tein Jack-Rich, has been described as the president Nigerians were not given.

The Founder and CEO of FDN Projects, Mr Olufunsho Ajagbonna said during a visit on Jack-Rich, to intimate him of the group’s plan to honour him with an award.

The FDN Projects are the organisers of the ”Democracy Heroes Awards Africa”.

At the 2022 Awards, which is the 10th edition, the Belema Oil CEO will be honoured with the ”Spotlight Politician of the Year” award.

Ajagbonna said Jack-Rich was the kind of President Nigerians, especially youths, were yearning for, but were not given the opportunity to vote him as a leader.

”You are just the president they did not give us.

”We are praying that come 2027, give it a shot, don’t give up, though we do not know when it will happen, we however, believe it is a calling,” he said.

According to him, the organisers of the award do not just give awards to people they choose, their awardees are chosen by the public.

He noted that Jack-Rich was nominated for the award because of his track record of philanthropic work as decided by the people.

”We only give awards to people selected by the people,” Ajagbonna said.

He said the ceremony for the awards will be held on Aug. 18, in Abuja.

According to him, Jack-Rich and others such as the Vice President Yomi Osinbajo, governors Nyesom Wike of Rivers, Yahaya Bello of Kogi, Dave Umahi of Ebonyi and former Minister of Transportation, Rotimi Amaechi, have been nominated for the awards scheduled to hold on Aug. 18.

Responding, Jack-Rich noted that Nigeria was endowed with a ”phenomenal amount of content and phenomenal enrichment of values ”.

He therefore lauded the organisers for not only rewarding excellence in Nigeria, but from the African continent.

”That goes to show that our generation cannot afford to isolate resource from societal advancement,” he said.

He also thanked those who voted to nominate him for the award, and pledged to always live up to the expectations of Nigerians who believed in him.