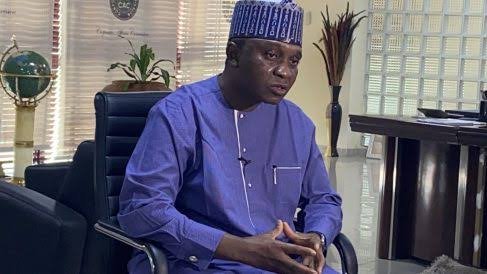 The Corporate Affairs Commission (CAC), has restated commitment to implementing reform initiatives aimed at repositioning it as one of the best Registries globally .
The Registrar-General  of CAC, Alhaji Garba Abubakar, said  this at a plenary session of the Nigerian Bar Association at the16th Annual International Business Law Conference.
The event has as its theme: “Recent Developments in the Business Law Environment”.
Abubakar, who recalled signing of the CAMA, 2020 into law on August 7, 2020 by President Muhammadu Buhari, said the law paved way for new set of operational rules and triggered re-engineering process.
Represented by Justin Biraol, the Director Compliance, the CAC boss said CAMA, 2020 had revolutionised the Commision’s operations.
According to him, the new law has not only eliminated crowd that miles around its offices but has also greatly reduced corrupt practices.
He said that the reforms dispensed with printing of physical Certificates as e-Certificates were now being sent to customer’s email addresses or dashboards.
Abubakar said that the measure had made it possible for anyone from anywhere across the globe to do business with the Commision without human interface with CAC personel.
The registrar-general said  that  the CAC recently issued Companies Insolvency Regulation 2020 which allowed for proper implementation of Business Rescue Mechanism introduced in Sections 434-549 of the Act.
The News Agency of Nigeria (NAN) reports that the Commision’s presentation on “CAMA 2020, The Journey So Far” was succeeded by a Panel of Discussants segment chaired by Toyin Bashir of Banwo & Ighodalo who was joined by four others..
NAN