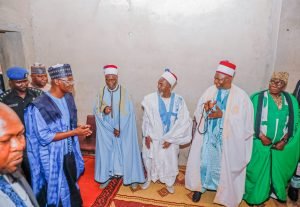 Engineer Sule, while on a condolence visit at the palace of the Aren Eggon, in Nasarawa Eggon, on Wednesday, described the late royal father as a total gentleman and a man of peace.

According to the Governor, the late Bala Abainei Angbazo, has played key role not only in developing Nasarawa State but the country at large.

Describing the day as sad, he however urged the Nasarawa State Council of Chiefs, the immediate family of the deceased, the Eggon Nation, the people of Nasarawa, as well as the entire country, to take solace in the fact that Almighty Allah has already promised that every soul shall taste death.

“Today his time has come because God has already promised us that every life must taste death. And everyone of us, one way or the other, will join in the call of the almighty Allah.

“I use this opportunity on behalf of the people and government of Nasarawa State to pay sincere condolences to you our royal fathers, the immediate family, the Eggon Nation, to the good people of Nasarawa State and indeed, people of Nigeria. Because this is a gentleman that has played a key role, not only to develop Nasarawa State but actually the country as a whole,” he stated.

He announced that his administration will do whatever possible to continue to support the traditional council, as well as the Aren Eggon palace.

The Governor appreciated the traditional rulers for their show of love and for rallying around to support one of their own who passed onto the great beyond.

Engineer Sule, on behalf of his family, people and government of Nasarawa State, especially condoled with General Angbazo and all members of the family, as well as members of the Aren Eggon traditional council.

The Governor equally prayed for the repose of the soul of the departed royal father.

Responding on behalf of the Nasarawa Council of Chiefs, as well as the family of the late Dr. Bala Abeni Angbazo, the Chairman, Nasarawa State Council of Chiefs and Emir of Lafia, HRH Justice Sidi Muhammad Bage rtd, thanked Engineer Sule for his prompt response since the news of the passage of the late Aren Eggon broke out, describing it as true leadership and a show of love to the people.

The Emir of Lafia, who was represented at the event by the Emir of Keffi, HRH Dr. Shehu Chindo Yamusa III, assured the Governor of continued support from the traditional institution, adding that they will continue to support his administration to succeed.

The Chairman, Nasarawa State Council of Chiefs said they have since accepted the demise of the Aren Eggon as an act of God.

Earlier, while paying the traditional Sallah homage on the Governor at the Government House, members of the Nasarawa State Council of Chiefs, prayed for the repose of the soul of their departed colleague, with the Etsu Karu, HRH Dr. Luka Panya Baba leading the prayer.

The late Dr. Bala Abaine Angbazo, died at the age of 89 after a protracted illness.

He died as the longest serving traditional ruler in the state, after he was installed on July 11, 1981, having spent 41 years on the throne.