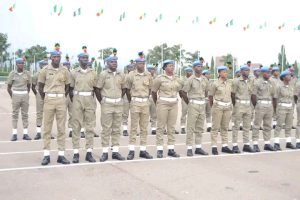 The Director General of Coalition of Nigeria Youth on Security and Safety Affairs (CONNYSA), Amb. Ade Mario Emmanuel has calls for urgent passage of Peace Corps of Nigeria (PCN) Bill

He expressed concerns over abysmal state of security in the country leading to incessant killings and continuous attack on worship centres,

While the perpetrators of Owo St Francis church attack are yet to be identified and apprehended, there has been yet other similar attacks in Kaduna, and other parts of the country, Said Emmanuel

The DG also disclosed that a Catholic Priest kidnapped on Sunday 26th, June in Auchi Edo State was killed by his abductor’s

He equally condemned the attacks on the people of Zamfara State, resulting in the state government plea requesting Federal Government to issue arms license for people to defend and protect themselves.

Emmanuel emphasized that the Nigerian Security architecture lacks adequate man-power, hence, Security voluntarism should be encouraged among the Youths to curtail the level of insecurity in the Nation.

CONNYSA made the following demands to the Federal Government to help mitigate the insecurity in Nigeria,

The immediate passage of the Peace Corps of Nigeria bill which is long overdue, the passage of the bill will take thousands of youth off the street and offer them employment, it will also complement and contribute greatly to the efforts the Federal Government and Security agencies have put in place to curb insecurity in the country.

2. In encouraging voluntarism, Conyssa is the only organization that have about 80% of youth volunteers across all the local Government Areas in Nigeria. Therefore, it’s imperative that all the security agencies in Nigeria should instruct their divisional officers to work effectively with Youth volunteers of CONYSSA in all Local Government Areas for vital Security informations and aborting criminal activities that may lead to serious unrest in the community.

3. CONYSSA is calling on all the critical stakeholders in the country to regard the Youths in Nigeria as ready instrument that can be involved in the process of salvaging the criminal activities in the country.

The DG . of CONNYSA has appealed to the Federal Government to converge a youth security summit for the critical stakeholders