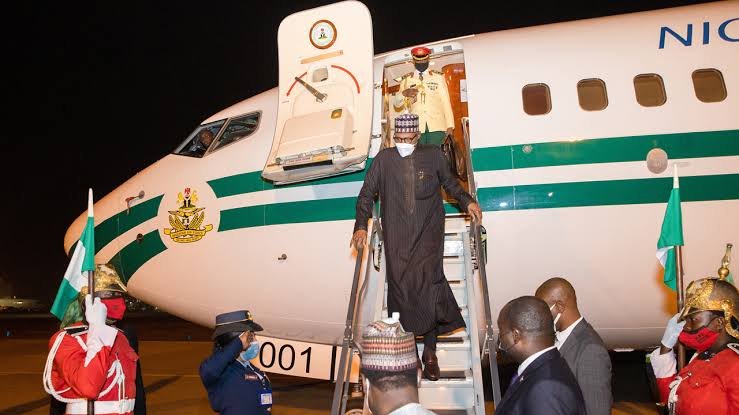 President Muhammadu Buhari, in the course of the week, visited Kigali, Rwanda, where he participated in the 26th Commonwealth Heads of Government Meeting, and also held bilateral talks with world leaders.

The Nigerian leader, who returned to Abuja on Sunday, had while in Kigali, visited the Kigali Genocide Memorial in Rwanda where he made a passionate appeal to Nigerians to be tolerant of one another and embrace peace for the general good of the society.

Buhari toured the permanent exhibitions at the Memorial and laid a wreath at the mass graves where more than 250,000 victims of the genocide were buried.

He also paid tribute to the memory of the victims and prayed for healing for the survivors.

After the historic visit, the president told journalists that a lesson from his visit was the need for Nigerians to continue to be tolerant of one another.

He added the nation should preserve its own historical antecedents from the Nigeria Civil War (1967-1970).

Also on the same day, the president held bilateral meetings with Jamaican Prime Minister, Andrew Holness, and Prime Minister of Great Britain, Boris Johnson on the margins of the 26th Commonwealth Heads of Government Meeting (CHOGM) in Kigali, Rwanda.

At the meeting with the Jamaican PM, Buhari lauded the relations between Nigeria and Jamaica.

“Our relationship dates back in time, to generations ago. Thank you for strengthening it, particularly on the economic and political fronts,” he said.

Also at the bilateral engagement with Prime Minister of Great Britain, Buhari again reiterated his resolve to respect the maximum term limit in the Nigerian Constitution.

The UK PM, obviously not quite familiar with Nigeria’s maximum two terms limit, had asked if President Buhari would run for office again.

“Another term for me? No! The first person who tried it didn’t end very well.”

On the leader of the proscribed Indigenous Peoples of Biafra (IPOB) Nnamdi Kanu, not being allowed to see his lawyers privately, the president dispelled such insinuation.

He said the detained separatist was being given every opportunity under the law “to justify all the uncomplimentary things he had been saying against Nigeria in Britain”.

The Nigerian leader had on June 24, congratulated Baroness Patricia Scotland, on her reappointment as Secretary-General of the Commonwealth.

Leaders of the Commonwealth meeting in Kigali, Rwanda on Friday reappointed Scotland by consensus for a further two years to complete the balance of her period in office.

He commended the purposeful leadership of the Dominican-born barrister and diplomat in the last six years.

The last official engagement of the President in Kigali was his meeting with Nigerians in the Diaspora on the margins of the 26th Commonwealth Heads of Government Meeting (CHOGM)on June 26.

At the meeting,  Buhari had hailed Nigerian youths excelling at home and abroad, saying the country would welcome inputs and investments from compatriots with international exposure for the economy to thrive.

He said: ‘‘It gives me great pleasure to be in Kigali, Rwanda and to meet with you, members of the Nigerian Diaspora as part of my regular meetings with Nigerians wherever I visit other countries.

The News Agency of Nigeria (NAN) reports that before departing for Kigali on June 22, President Buhari had presided over the virtual meeting of the Federal Executive Council (FEC) in the State House, Abuja.

The Council approved N50 billion for rehabilitation of roads in Taraba and Yobe states as well as the construction of injection substations to boost power supply in Gwarinpa area of the Federal Capital Territory.

NAN reports that N48.4 billion of the amount was approved for roads in Taraba and Yobe while the remaining N1.6 billion was meant for the FCT electrification project.

The  Council also approved the digitisation of the services of the National Social Insurance Trust Fund (NSITF) to be known as e-NSITF.

Also on June 22, the  President, via a statement by his media aide, Malam Garba Shehu, described as unacceptable the recent spate of attacks on Churches in some parts of the country.

Buhari said the attacks were clear indication that some enemies and wicked people were bent on causing religious tensions in the country.

The week also featured President Buhari’s interview, granted to Bloomberg News, where the president dismissed the call by the International Monetary Fund (IMF) and the World Bank to remove fuel subsidy.

The president remarked that subsidy removal was becoming increasingly untenable.

He also revealed that the government had earmarked 550 million dollars to provide 20,000 Standalone Solar Systems (SHS), as well as Solar Hybrid mini-grids in over 250 locations.

He said: “Take my Presidential Power Initiative (PPI), a government-to-government initiative between the Governments of Nigeria and Germany, with Siemens AG, to upgrade the electricity grid with a 2 billion dollar investment.

Also, the Presidential Media Team, in collaboration with a national and international Media Consultant, Ata Ikiddeh, announced the unveiling of President Muhammadu Buhari’s Legacy Projects in a series of online publications.