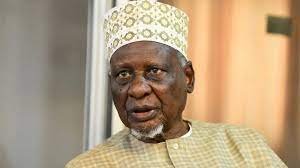 Yakasai, also a human rights activist and member of the Justice and Equity for Peace and Unity Initiative (JEPUN) made the  remarks on Thursday  in his congratulatory Message to Tinubu, a former governor of Lagos State who won the APC presidential primaries in Abuja on Wednesday.

The elder statesman said: “The election of Asiwaju Bola Ahmed Tinubu as the APC Presidential flag bearer is indeed an important political development in our country.

According to him, it is gratifying to note that this is the first time the major political parties are fielding non military actors as their presidential flag bearers.

He said that the election victory of either of the major political parties  would signify the complete and total break away from military influence in the nation’s polity.

Yakasai said that it would bring about the return of Nigeria to a full fledged democratic tradition and practice for the first time, since the return of civilian rule in 1999.

“This transition will be a milestone and will  lead us to a full fledged democracy.”

The elder statesman, however,  described Tinubu as a political Juggernaut and a  sage.

He appealed to all candidates vying for various political positions in the country to commit themselves to the principles of playing politics according to the rules of the game.

Yakasai urged political gladiators to eschew politics of bitterness, violence and do away with culture of thuggery in  political activism.

He advised them to return the country to the path of civility in the conduct of partisan politics.

“May their emergence be the harbinger of the return to politics of decorum, without bitterness.

“May their emergence be the beginning of the arduous task of finding better strategy that will enhance the needed national unity, peaceful coexistence and cohesion in our country,  a prerequisite for genuine nation building.

“I pray that the coming general elections will be conducted in a peaceful atmosphere free from violence,” he added.

Yakasai expressed hope that the Independent National Electoral Commission (INEC) would conduct the election in a peaceful, credible manner devoid of rigging and manipulation.

The News Agency of Nigeria (NAN) recalls that Tinubu, one of the national leaders of the ruling party defeated 12 other presidential aspirants including Vice President Yemi Osinbajo to clinch the APC ticket.

The main opposition, the Peoples Democratic Party (PDP) on May 29,  elected former Vice President Atiku Abubakar as its presidential candidate for the 2023 general elections.