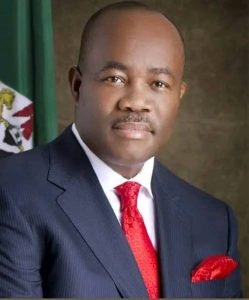 JUST IN : NYCN, 54 other youth groups calls for the adoption of Senator Godswill Akpabio as APC Presidential Flagbearer

The National Youth Council of Nigeria (NYCN), and 54 other affiliated youth groups, have called for the adoption of Sen. Godswill Akpabio as the presidential flagbearer of the All Progressives Congress (APC), at the party’s primary currently holding in Abuja.

Dr Solomon Adodo, President of the NYCN, made the call on Tuesday during a World News Conference in Abuja.

”We appreciate the Progressive Governors Forum for throwing their support for a president of Southern extraction, and in the same vein, we call on delegates of the APC to vote and support His Excellency, Distinguished Sen. Godswill Akpabio, CON, in today’s APC Presidential primary.

”An Akpabio candidacy is not only a sure guarantee to easy victory at the polls, but also a government of uncommon transformation, as has been demonstrated in Akwa-Ibom State while he was governor.

”And in the Ministry of Niger Delta Affairs, as the honourable minister, this is also in addition to his sterling performance at the Senate of the Federal Republic of Nigeria, Adodo said.

According to him, the decision to support Akpabio is because of the overwhelming support and individual youth group endorsements he has across the country.

”The youth believe that at this critical stage of the country, only a leader of the antecedents and standing of Distinguished Sen. Akpabio, should be trusted to lead the country.

”Recall that as the Governor of Akwa-Ibom State, His Excellency demonstrated his Pan-Nigerianism by making all his interventionist and welfare programmes to enjoy national reach.”

According to the youth leader also, every Nigerian of whatever persuasion, resident in Akwa-Ibom, benefitted from Akpabio’s free and compulsory education policy, as well as other socio-economic support programmes.

”Even as the Honourable Minister of Niger Delta Affairs, he refused to run the ministry with a parochial mentality of restricting everything to the region,” he/she said.

He said wherever a national touch was needed in the activities of the ministry, Akpabio was willing and ready to display that nationalist spirit.

He said that at a time that the country must pursue the project of National Unity very vigorously, the former governor was the perfect candidate.

”We therefore present him to our dear delegates and leaders of the APC, vote, support and adopt Akpabio as the candidate of the party for the 2023 presidential election.”