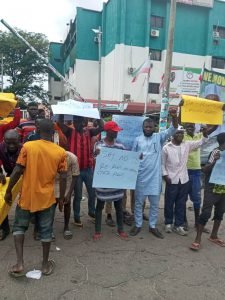 A group of aggrieved members of the Peoples Democratic Party in Lagos state has organized a protest at the party headquarters, Wadata Plaza in Abuja.

They are therefore calling on the party leadership to maintain the status quo and forward the names of the House of reps winners who won at the party primaries to INEC and avoid intractable crises in Lagos state PDP by organizing the planned fictitious election on Monday.