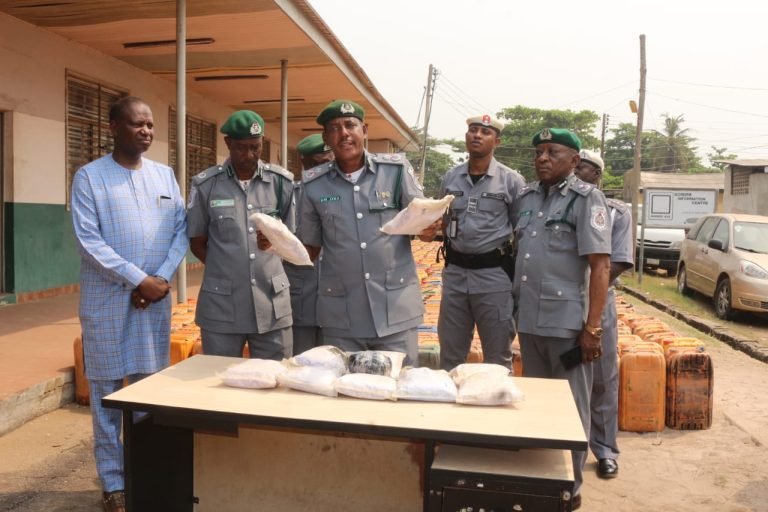 The Nigeria Customs Service (NCS), Seme Command says it has intercepted 11.931kg of cocaine valued N3,916,624,127 concealed inside a Ford Transit Bus conveying religious books.
The interception occurred during a stop and search operation along Seme-Badagry expressway on Sunday morning.
Mr Hussein Abdulahi, the spokesman for the Command, said in a statement on Friday that customs officers also intercepted 31,950 litres of petrol valued N10,041,198 along Badagry creek.
He quoted the Customs Area Controller, Comptroller Bello Jibo, as saying that the intercepted substance was subjected to test and verification by the National Drug Law Enforcement Agency (NDLEA) and National Agency for Food Drug Administration and Control (NAFDAC).
Jibo said that the test indicated that it was cocaine weighing 11.913kg, while its street value was estimated to be N3.9billion.
He said that one suspect was arrested in connection with the seizure.
The Comptroller said that the command had initiated offensive patrol against the smuggling of petroleum products along the creeks within the Seme and Badagry axis.
According to Jibo, this renewed effort led to the interception of large quantities of petroleum products packaged in sacks on Jan.26.
He said the items were successfully evacuated to the Command premises where an examination was conducted and 1,065 jerrycans of 30 litres each discovered.
“The petroleum product equivalent to  31,950 litres was discovered with Duty Paid Value at N10,041,198.00,” he said.
He commended the sister agencies and relevant stakeholders at Seme border for their assistance.
The CAC reiterated the commitment of his officers and men in enforcing government fiscal policies for overall national growth and development.
NAN