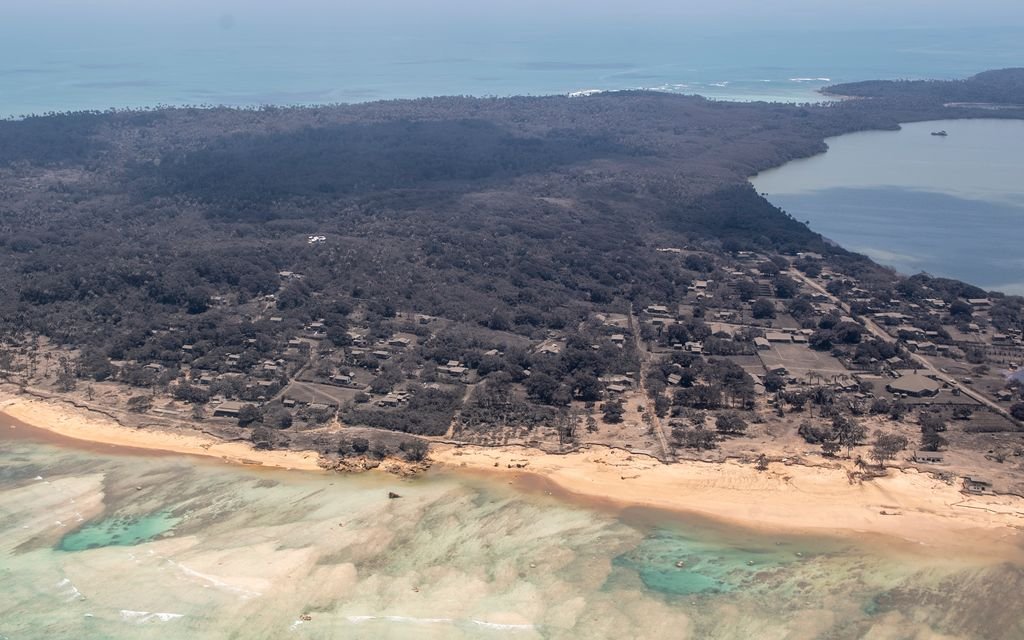 A supplied image shows the view from a P-3K2 Orion aircraft flying over an area of Tonga with ash on the roofs of homes and surrounding vegetation, Monday, January 17, 2022. (AAP Image/Supplied by NZDF, Vanessa Parker) NO ARCHIVING, EDITORIAL USE ONLY

Drinking water has become a priority due to the ash fall and tsunami from the eruption of Hunga-Tonga-Hunga-Ha’apai in the Pacific kingdom of Tonga, according to the Government of Tonga.

The government said in a statement on Saturday that the situation had affected almost every person in the area.

The government released its second update since the eruption and said an estimated 84 per cent of its about 105,000 people had been affected across all of its islands.

It said drinking water and food supplies were a priority, with almost 60,000 litres of water distributed as part of relief efforts so far.

“Although there has been no further volcanic activity, challenges to sea transportation remain as fallout on the surface of the ocean is causing damage to the vessels,” the statement said.

At least 62 people had been relocated from the island of Mango to Nomuka after losing their homes and all of their personal belongings.

“It is envisaged that these displaced persons will be relocated to Tongatapu given the current food and water shortages on Nomuka,” it added.

A field hospital was set up on Nomuka as the health centre was washed away, however the country’s main hospital remained open.

The statement indicated that emergency relief supplies were on the way to outer islands but communication remained “an acute challenge”.

The death toll remained at three – two Tongans and a British national.

Aid supplies and more than 20 million U.S. dollars have been committed to support Tonga from nations across the world.

“His Majesty’s Government is deeply appreciative to the International community for their generous and timely assistance in response to this unprecedented event,” the statement said.