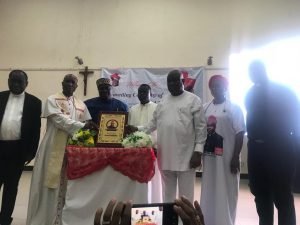 Governor Hope Uzodinma of Imo has urged Nigerians to live an exemplary life worth emulating while alive as our good deeds would speak for us later in life.

The governor gave the advice during the unveiling of a memorial foundation in honour of Monsignor Ralph Madu at the Catholic Secretariat of Nigeria,Abuja.

The Late Monsignor Ralph Madu Died January 17,2021 and until his death was the Imo Government House Chaplain and the immediate past Secretary General of the Catholic Secretariat Abuja .

The governor was represented by his Special Adviser,Abuja Liaison, Mr Jimmy Imo, who urged Christians to be their brother’s keeper,show love and display peace at any given opportunity so as to move the country forward.

He noted that inasmuch as they were various sectors enhancing the development of the economy,Nigerians and Christians needed to buttress this up with their kind and humane virtues.

According to Uzodinma when you live for others you live forever ,that was the live my former chaplain lived,he was quick to correct any wrong action and to advise on an issue.

” He was a great man,he never discriminated,he was quick to assist,as my chaplain he was an exceptional priest,he would preach peace and unity,forgiveness and need to draw closer to God.”

He describe Late Madu as a brother,friend confidant and a selfless humanitarian, who cared less for the needy and vulnerable.

Speaking during the event also was the chairman of the occasion and former Senator representing Imo West, Osita Izunaso who said that the good life lived by the late Catholic priest was the reason for been immortalised.

He said through the unveiling of the foundation in his memory,we have seen and heard a lot about his good deeds to ensure Nigerians lived in peace,

He however said Madu was not dead, but alive in the Lord,adding that ” After the unveiling of the foundation in his honour, we will have a task on our hands, which is fulfilling the dreams of the initiators”.

“Monsignor Ralph Madu was erudite, well educated. Even after he got a PhD, he took a course in Mass Communication, while lecturing in Enugu. He was a good man.

” If he wasn’t a good man, there wouldn’t be this love and massive turnout this day. So, his memory lives on and we pray the foundation will be sustainable.”

Also the Chairman of the Central Planning Committee of the Monsignor Ralph Madu Memorial Foundation, Rev. Fr. Jude Ike, said that the journey to the formation of the foundation started in June last year.

He said that few months after the death of the Monsignor, his friends and well wishers suggested establishing a foundation in his memory.

“We went ahead to register the foundation with the Corporate Affairs Commission, in readiness for its launch today, marking the anniversary of his death.

” To the glory of God, the project is already a success, judging from the turn out of priests and those he associated with over the years. It is our sincere prayer that the Foundation will be sustainable,” he said.

Others who spoke at the unveiling ceremony were the Chairman Unveiling Organising Committee, Rev Gerald Njoku who said Late Madu was a special figure,talented goodman.

He said Madu lived a good life and touched the lives of many,he fought for the people and was a good adviser.

Sir Emmanuel Mbaka,the Chairman,Board of Trustee of the foundation urged Christians to be bridge builders,transformers and of great impact and inspiration just like the celebrant.

Earlier during the sermon,in a mass of resurrection in honour of the late priest,Fr Zac Samjumi harped on the need for Christians to embrace human develop and human relationship for common humanity.

Samjumi who is the Secretary General of the Catholic Secretariat of Nigeria said those virtues were for the good of humanity and national development.

“Once you don’t discriminate ,you don’t cheat, and you are not greedy,know you are on the right path to greatness,” he said.

Highlight of the occasion was the blessing of the crest of the Memorial Foundation in memory of Monsignor Ralph Madu by the the Chief Celebrant and Bishop of Minna, His Lordship, Most Rev. Dr. Martin Uzoukwu.