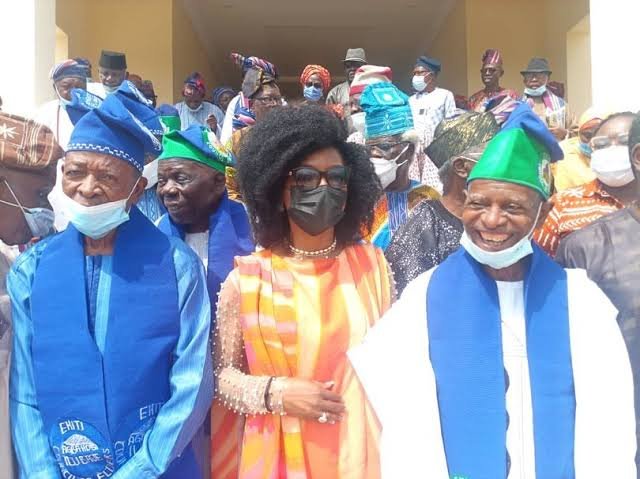 Ekiti Government is seeking for Federal Government’s assistance for its
Elders’ Resort Centre to boost the morale of senior citizens and give them a sense of belonging.

The Deputy Governor, Chief Bisi Egbeyemi, made the request when he received a delegation from the National Senior
Citizens Centre (NSCC) Abuja, led by the centre’s Director-General, Dr Emem Omokaro, on Wednesday in Ado-Ekiti.

Egbeyemi said that the resort centre would provide opportunities for the aged to socialise, among other welfare benefits.

Representatives of the Ekiti Council of Elders, led by the General Secretary, Mr Niyi Ajibulu and the Nigeria Union
of Pensioners, led by the state Chairman, Mr Joel Akinola, also joined the delegation.

The deputy governor, therefore, called on the Federal Government, through the NSCC, to assist in providing facilities at the resort centre,
which he said is nearing completion.

He explained that “the Kayode Fayemi-led administration places premium on the welfare of old people.

“Going down into history, it is the first administration to pay monthly stipend to registered senior citizens under its Social Security
Scheme for the Aged.

“The government has also been clearing the backlog of arrears of gratuities. Our administration cares for the welfare of the aged and
the governor has demonstrated this during his first and second term with payment of monthly stipend known as ‘Owo Arugbo’
(aged money) so that they can meet their basic needs.

“During this present tenure, we are building the Ekiti Elders’ Resort Centre. When completed, our old people can go there and relax,
thereby reducing boredom and loneliness. We want the Federal Government to assist us in providing facilities at the centre.”

Earlier in her remarks, the NSCC director-general had commended the state government for taking the lead in caring for senior citizens
through various empowerment initiatives.

Omokaro explained that the NSCC was established through an Act signed into law by President Muhammadu Buhari, and called for nationwide
domestication of the law to take care of the needs of the aged.

She said that the NSCC wanted to partner state governments and would want to use Ekiti as an “entry point’’, expressing confidence that the
bid would be better achieved with Fayemi’s chairmanship of the Nigeria Governors’ Forum (NGF).

She added that “we have been briefed about the governor’s support for Ekiti Council of Elders and we learned of the Elderly People’s Resort
being executed by this administration.

“We want to partner Ekiti to build the capacity of workers on how to take care of the elderly but the NSCC platform will be a tedious one if there
are no frameworks at the state level to support the elderly.”

The NSCC boss urged other states of the federation to emulate the Ekiti example by putting up an enduring legacy for the aged for them
to contribute meaningfully to the society.