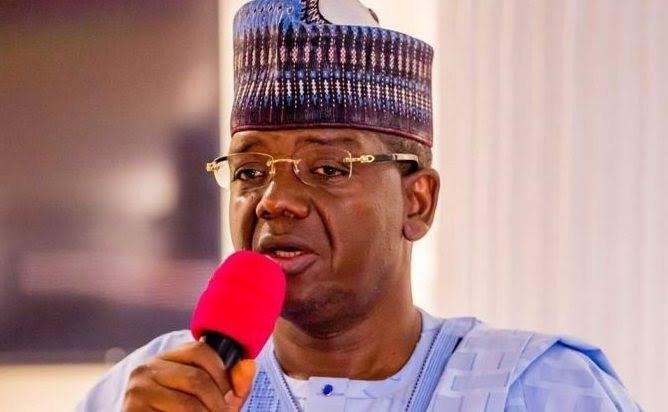 Gov. Bello Matawalle of Zamfara has restated his commitment to rid the state of banditry, kidnapping and other criminalities.
This is contained in a statement by his Press Secretary, Jamilu Birnin-Magaji, on Tuesday in Gusau.
According to the statement, Matawalle stated this while receiving the leadership of the Jama’atul Izalatul Bidi’a Wa’ikamatus Sunnah (JIBWIS) led by its National President, Sheikh Abdullahi Bala-Lau.
The delegation was in the state to sympathise with the governor on the recent bandit attacks in Anka and Bukkuyum Local Government Areas of the state.
Matawalle confirmed that 58 persons were killed by the suspected bandits during the attacks.
While expressing delight with the visit, Matawalle said the state government had adopted proactive measures to end banditry and other criminal activities in the state.
The governor, who visited the affected villages assured the residents that security forces were trailing the bandits behind the killings.
He said that the state government and security agencies had mapped out formidable plans to ensure that the killers were arrested and prosecuted.
Matawalle urged JIBWIS leadership to embark on sensitisation activities (Da’awah) to preach peace and tranquility as well as create awareness on the dangers of killing innocent souls.
He said the state government would assist the organisation with necessary support and logistics to enable it reach out to all nooks and crannies of the country to preach peace.
Matawalle reassured of efforts to secure the release of kidnapped victims through ongoing onslaughts by the security operatives on identified bandits’ camps.
He said the state government had blocked all possible exit points of bandits fleeing the state, and commended the Federal Government for its commitment towards tackling terrorist groups in the country.
The governor also applauded President Muhamnadu Buhari for the efforts to rid the country of the current security challenges.
Earlier, Bala-Lau said the delegation was in Zamfara to commiserate with the government and people of the state over the bandits’ attacks in Anka and Bukkuyum.
Bala-Lau described the killings as “inhuman and barbaric,” urging the federal government to tackle the menace.
The cleric enjoined Muslims to pray for an end to the carnage and peaceful nation.
While commending the governor for his unrelenting efforts to restore law and order, Bala-Lau advised him to initiate reconciliation process among aggrieved communities.
NAN