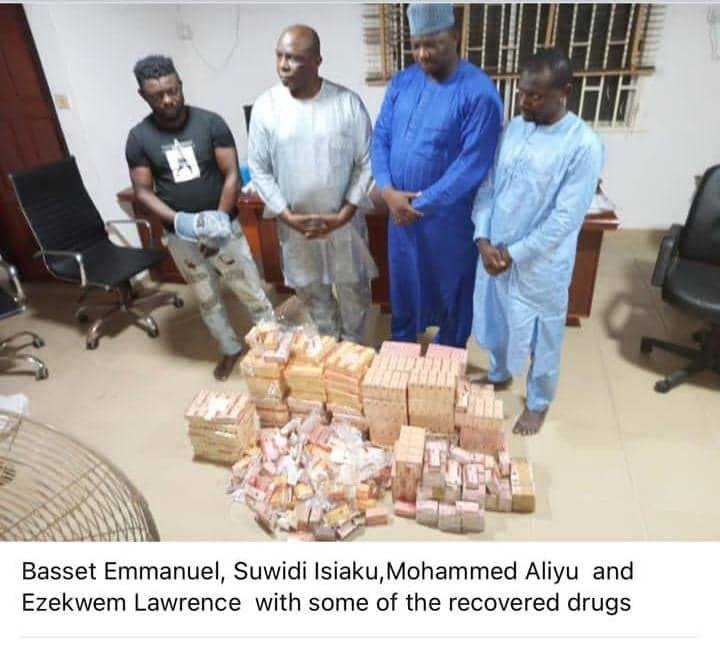 NDLEA has raided two clandestine drug stores in Lagos where a pregnant woman was arrested with 1,442 kilograms of skunk.

Mr Femi Babafemi, NDLEA’s Director, Media and Advocacy, stated on Sunday in Abuja that four men including a 62-year-old were also arrested with 182,000 tablets of Tramadol during the raid.

He stated that the 27-year-old pregnant woman was arrested on Dec. 17 when NDLEA operatives raided her store and home in the Ojo area of Lagos.

He added that another suspect was also nabbed with 29kg of the illicit drug in the same location.

“The previous day, Dec. 16, operatives had equally raided a hideout in Abule-Egba area of the state.

He added that during a routine stop and search at Obigbo, on Aba-Port Harcourt Expressway on Dec. 18, NDLEA intercepted a consignment of Tramadol.

The consignment, he explained, was concealed in a commercial Toyota Hiace bus with a waybill addressed to another suspect.

A follow-up operation led to the other suspect’s arrest.

“In Kogi, one suspect was arrested with 95.945kg of Indian hemp at Egba Town.

“No fewer than 20,000 capsules of Tramadol coming from Onitsha, Anambra, were seized at Otukpo, Benue and a suspect arrested.

“In Adamawa, a search operation in a house at Ajiya Street, Jimeta, led to the arrest of a female suspect with 16 pinches of cocaine,’’ he also stated.

Babafemi added that a raid at Success Line, Marine Modern Market, Onitsha, led to the seizure of 234kg Indian hemp and the arrest of a suspect.

He stated also that one suspect was arrested in Okpuje, Owan West LGA on Dec. 18, with 481kg Indian hemp and another suspect with 81kg at Sobe.

“In Ekiti, 1,420kg of Indian hemp was recovered from Ara in Ikole LGA, while in Akure, Ondo State, operatives arrested one female suspect in her residence at Itamo Igoba, with 573kg Indian hemp.

“In other parts of the state, 450kg of Indian hemp was seized on Ipele-Idoani Road, and 420.5kg Indian hemp also recovered at Ogkogu camp, Ipele, both in Owo LGA,’’ Babafemi stated.