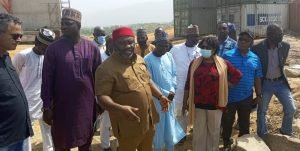 The Federal Capital Territory Administration (FCTA) has threatened to sanction the contractor handling the Apo-Karshi road project in Abuja over continued delay in the completion of work.

Francis, however, applauded the progress of work at the Karshi Dam project site.

The coordinator, who was on project inspection tour of the Federal Capital Territory (FCT) satellite town area expressed concern over the attitude of some contractors delaying the completion of projects considered very dear to people

He berated the contractor handling the Karshi-Apo road, saying he had no reason to delay the completion of the project since the government had played its part

According to him, the last payment tranche has already been processed and may hit the contractor’s account any moment.

He explained that the Karshi road would help decongest traffic on the Asokoro-Keffi road as people living in Nyanya, Karu, Jikwoyi, Gida Daya, and Orozo would have alternative and easy access to town when completed.

Earlier, Kakatar Engineering Limited, the contractor handling the road project had briefed the STDD inspection team that the project “has already attained 89 per cent completion” and pledged to complete the remaining 11 per cent within five months

The News Agency of Nigeria (NAN) reports that the 13.25 kilometer Apo-Karshi road project was conceived as an alternative route to ease the gridlock experienced on a daily basis by workers and people driving to the capital city from the Mararaba-Nyanya axis.

The project has suffered delay due to an error in the design whereby, a huge rock outcrop on the alignment of the road corridor became very difficult to deal with. (NAN)