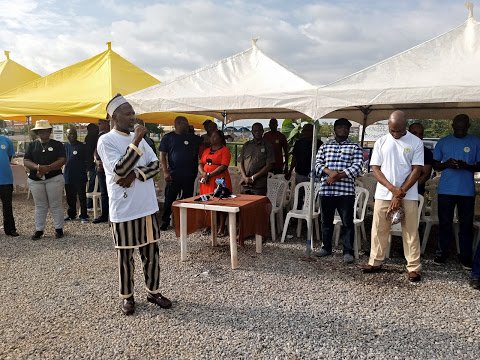 The Chikakore Community of Bwari Area Council in the FCT, has appealed to Pastor Joshua Iginla, the General Overseer of Royal Champions Assembly, to help in fixing the deplorable road that leads to the Church.

It said iginla who is known for his philanthropic work, should emulate his counterpart , Bishop David Oyedepo, of Winners Chapel International Church.

Aluta News reports that Oyedepo recently approved N650m for a road construction in Ota, Ogun State, where the Church has its headquarters.

Mr Joseph David, who made the appeal on behalf of Chikaore community in Abuja, regretted that such an important road, that leads to a place of worship of that magnitude, had become a death trap to motorists and was daily destroying cars.

David therefore appealed to the man of God to assist the community in the construction of the road.

Another resident of Chikakore community, Mr Emmanuel James, who also acknowledged Pastor Iginla’s charity work that cuts across all political or religious divide, expressed confidence that the cleric would do the needful.

According to James, every year especially during Iginla’s birthday, he splashes cash and food items on widows and the less privileged of the society.

He said the man had once spent millions of Naira to fly a Muslim girl, who was bathed with acid, abroad for surgery.

James said the siting of the Church in the community was a big blessing as it had brought many economic, physical and spiritual benefits to the people.

He said fixing the road would also benefit the thousands of worshipers that plied that road to the Church on a daily basis and often encountered hoodlums in the night due to the bad road.

A member of the Church who pleaded anonymity, also lent his voice to the call by the community.

The member noted that the deplorable condition of the road often discouraged some members as the only viable option they had was to take commercial motorcycles for their safety and their vehicles.

The member advised the man of God to use the 13 years anniversary of the Church which comes up in November, to make the road motorable in order to ensure a large turn out for the celebration.