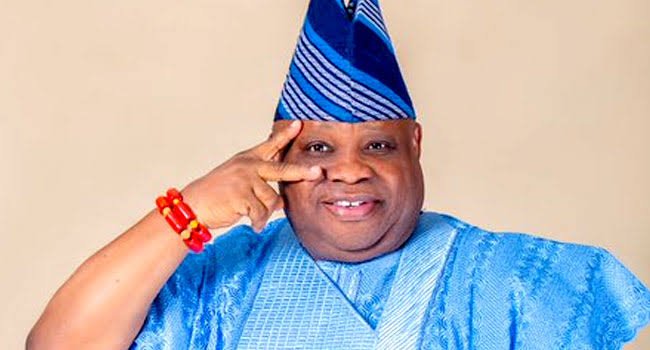 Sen. Ademola Adeleke, says he has accepted his election as Osun state governor.
In his acceptance speech on Sunday in Ede, Adeleke said he was overwhelmed by the love and support of the electorate.
He pledged his total commitment to the best interest of the people and the state, saying that: “I give praise and adoration to Almighty.
“I praise the courage and determination of the good people of Osun state. I commend men and women of goodwill, the young and the old.
“I am overwhelmed by your love and support.
“Our state has turned a new page. We have launched a landmark path for progress and prosperity of our people.
“It is therefore with strong faith in God and trust in our people that I accept my election as the Governor of Osun state.
“I pledge my total commitment to the best interest of the state and the people.
“I dedicate this victory to my late brother, His Execllency,  Sen. Isiaka Adetunji Adeleke, and every indigene of Osun state, and to all my supporters and friends”.
The News Agency of Nigeria (NAN) reports that the Independent National Electoral Commission (INEC) on Sunday declared Adeleke as the winner of the Saturday’s governorship election in the state.
Announcing the results, INEC Returning Officer, Prof. Oluwatoyin Ogundipe said Adeleke polled 403,371 votes to defeat his closet rival, Gov. Gboyega Oyetola of the All Progressives Congress (APC), who scored  375,027 votes.
NAN also reports that the PDP won in 17 local government areas while APC won 13.
The 13 LGAs won by APC are Ilesa East; Ayedaade, Boripe, Ifedayo, Ife Central, Boripe, Ola-Oluwa, Iwo, Isokan, Irewole, Atakumosa East and Ife East.
While the PDP won in Boluwaduro; Osogbo, Ila, Atakumosa West, Ifelodun, Ilesa West, Odo-Otin, Obokun, Orolu, Olorunda, Ife North, Irepodun, Oriade, Ede South, Ejigbo, Ede North and Egbedore LGAs.
In his reaction to Adeleke’s victory, the Timi of Ede, Oba Munirudeen Lawal, said his feelings for Adeleke’s victory could not be expressed in words.
Lawal, while speaking with newsmen in his palace in Ede, commended the people of the state for their support for the governor-elect.
“My feelings cannot be expressed because it happened so sudden but we thank God for the victory.
“I am happy because our son is now the governor-elect and we thank God for that,” he said.
The traditional ruler, however, described Adeleke’s victory as a victory for the whole state and not for Ede alone, adding that, “it is a victory for the whole people of Osun because he had a wide spread of votes across the state.
“It is not only votes from Ede alone that gave him the victory but the synergy between the people of the state that brought him to power”.
Meanwhile, hundreds of jubulating residents of Ede trooped to the streets in the town singing and dancing in celebration of Adeleke’s victory.
A correspondent of NAN who visited the town reports that the jubilants on motorcycles and open roof vehicles moved around the town singing in celebration.
Hundreds of people in jubilant mood also beseiged Adeleke’s residence and the palace of the community leader to celebrate the victory.
NAN