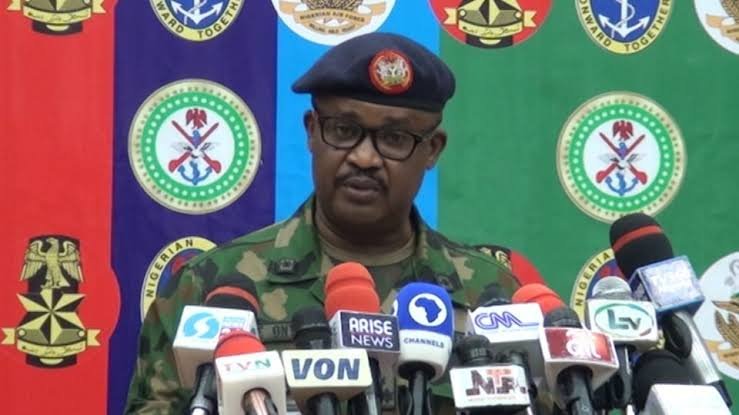 Defence Headquarters said that the troops of Operation Hadarin Daji, on May 21, arrested one, Jabe Buba, a foreigner and notorious terrorists’ informant, at Garuwa village, in Tambuwal Local Government Area of Sokoto State.

The Director, Defence Media Operations, Maj.-Gen. Bernard Onyeuko, said this while briefing newsmen on military operations across Nigeria, between May 19 and June 2, on Thursday in Abuja.

Onyeuko said that pictures and video of the foreigner, posing with rifles in the forest, were found in his cellphone and the sum of N130,000 was recovered from him during the operation.

He said the troops also recovered 292 cattle and one camel during an encounter with terrorists at Dampo village, in Bakura Local Government Area of Zamfara.

In Operation Whirl Stroke, he said the troops eliminated a kidnapping gang leader and two others who were all dressed in military uniform along Zakibiam-Ugba road in Benue and rescued one victim.

He said a notorious gun runner, Mr Morris Ayitu, was arrested alongside his wife and an accomplice, after a raid at his residence in Abirisi, in Guma Local Government Area of Nasarawa State.

In Plateau, he said the Headquarters of OPSH held a peace meeting with Bemood Fulani Stakeholders to sustain peace in Kuru area, in Jos South Local Government Area.