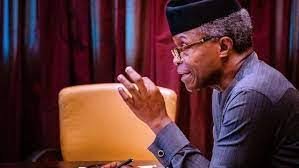 Vice President Yemi Osinbajo says the time has come to call out senior lawyers whose actions demean the rank of Senior Advocates of Nigeria  (SAN).

Osinbajo, himself an SAN, made the call at the Body of Senior Advocates of Nigeria (BOSAN)  2021 Annual Dinner and Scholarship Awards on Saturday in Lagos.

He was the Special Guest of Honour at the event.

He said that it was a burden on BOSAN and the Nigerian Bar Association (NBA) to ensure that their members remained disciplined and conduct themselves appropriately.

“There is a growing perception that some of our colleagues have developed unhealthy relationships which are meant to influence cases before our courts.

“And it now becoming the case that even younger members of our profession do much the same thing.

“I think it is time to commit to calling out those whose actions demean the ranks of SAN and ensure that they are brought before the appropriate disciplinary body.

“We must not allow a situation where the rank is demeaned because members of the public believe some of those in our ranks are those who actually corrupt the judicial system.’’

According to Osinbajo, the system of justice is a public resource which does not belong to the legal profession.

He said it neither belonged to the bar nor the bench but the people.

“It belongs to the people; we, lawyers and judges are paid operators of a service that our constitution created to resolve their disputes and give justice.

“We are custodians not owners; when this public resort is not working effectively on account of delays or it is being discredited by corruption, we, the operators, have a moral, legal and civic obligations to fix it.’’

He cautioned against being defensive but to correct the anomalies so as not to fail the people.

Citing the Bible, Osinbajo urged BOSAN members to stand for the voiceless.

“And to borrow the scriptures in Proverbs 31 vs 8, we would have failed to speak up as the voices of the voiceless and the vulnerable.

“Every one of us seated here today knows that there is a lot wrong with our system; history beckons us to fix it.

“I congratulate the leadership of BOSAN for sustaining this initiative and for instituting a scholarship scheme,’’ he said.

In his keynote address as the Special Host, Osinbajo, an alumnus of the college, recalled fond memories of his days in the school.

He urged the Old Boys of the college to consider a regular payment into an endowment fund in order to contribute the kind of money that would make not just a difference at present but also a difference into the future.

“So, we expect that all of those who were here will make a sacrificial commitment; I hope that the commitment will not just be for today.

“We will continue to do it on a regular basis,’’ he said.