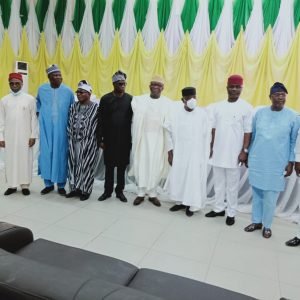 Ekiti State Governor, Mr Kayode Fayemi has urged Christians to put on the life on Christ, which is of selflessness and fear of God to the social domain and participate in politics to better the society.

He gave this advice in a remark at the First Annual General Assembly of Catholics in Politics and Catholic Business Leaders organised by the Catholic Action in Nigeria in Abuja on Saturday, urging Nigerians to look beyond religious divides and sentiments to elect their next leaders in 2023.

At the attendance were Traditional leaders, political figures and religious leaders including the Catholic Bishop of Sokoto Diocese, Rev Mathew Hassan Kukah and His Eminence John Cardinal Onaiyekan, among others.

Fayemi said the church “has important roles to play as the nation inches towards another cycle of elections in 2023 in mobilising the laity, women and youth organisations for effective political participation that will lead to the choice of quality and God fearing leaders.”

He said while it would be nice to have a more Christians emerge as winners in the 2023 general elections, Christians should not be beclouded by religious sentiments in exercising their franchise in the 2023 polls but should organise platforms to interrogate candidates seeking their votes to ascertain their suitability.

He added: “ it is important to look beyond the religious profession of the gladiators or even their ethnic or geopolitical origin.

“The church should develop a charter of concerns, which must be as inclusive as possible and engage the candidates in direct conversations and debates.

“I will want to see the church and its affiliates and perhaps, in association with other faiths, organize debates for candidates that address fundamental issues around freedom of religion, conscience, association and other areas of interest. The work of the Church in this respect is worthy of commendation, but we must do more,”he said.

He noted that leaders driven by the desire “to serve at various levels of governance can turn the tide of decay and create conditions for more of our people to live a better life.”

He charged the church to take part in the electoral processes as an observer and social orientation agent urging it to use its enormous platform to preach peace, tolerance, and consensus among the political class.

Fayemi explained that a united humanity was needed to defeat banditry and other forms of criminality that posed serious security challenges to the polity.

Lending his voice to divergent views on criminal acts being perpetrated in some parts of the country, Fayemi warned against clothing such acts in ethnic or religious garb.

He insisted that stakeholders should not be blinded by primordial sentiments in reacting to issues like banditry, kidnapping and killings in the country.

Mr. Emmanuel Akabe, the Deputy Governor of Nassarawa state in his goodwill address called on well-meaning Christians not to shy away from participating in partisan politics, which he described as a vehicle for nation building and a platform for the realization of the good of the society.

The Deputy Governor of Akwa Ibom Mr. Moses Ekpo, said politics has nothing evil in it if your hands were clean.

He said it was the duty of the church to help Nigerian get back to how it should be which was by coming out in numbers to vote and be voted for.

He commended the church for the conference he described as apt.

Mr Peter Agbontaen, the founder of Catholic Action in Nigeria said the programme was designed to assemble key stakeholders in Nigeria to address the political, business, social and cultural life of the nation.

He said the programme would further take position on affairs and matters of human life and dignity for the advancement of the common good.

The Ohaneze Ndigbo George Obiozor , Chief Iorbee Ihagh ,President General of the Tiv socio cultural organisation“ Mdzough u Tiv ’’ and Chief Ayo Adebanjo, National Leader of Afenifere , all called for the need to stabilize the country through national dialogue for peace, unity and social economic development.

The theme of the event is “ Advancement of the common good towards justice, unity structure and development of Nigeria. ’’

The Event was also in honour of His Eminence John Cardinal Onaiyekan who clocked 78 years who was committed and in support of the birthing of the Catholic Action in Nigeria, which will be held in his honour annually.