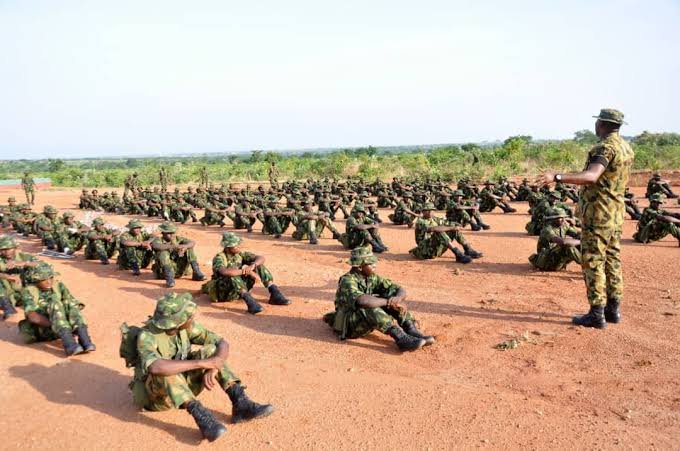 The News Agency of Nigeria (NAN) reports that the battle innoculation/fire power demonstration was the final phase of the cadets outdoor training held at Table Hill, Nigeria Army Area, Kachia.

NAN reports that phases of the exercise held between Jan. 8 and Jan. 14 in Plateau included map reading at Heipang and adventure training at the Citizenship and Leadership Training Centre, Shere Hills, Jos.

Also, the tactical and battle innoculation drills were conducted in Kachia general area between Jan. 14 and Jan. 29.

Addreesing the cadets, Maj.-Gen. Stevenson Olabanji, the Commander, Training and Doctrine Command (TRADOC), Nigeria Army, said the battle innoculation was aimed at exposing the cadets to the sights and sounds of the battlefield.

Olabanji said the battle innoculation had truly met the objectives of the exercise.

He said that, “this has given us a semblance of actual battlefield experience albeit without actual casualties and chaos associated with the real battlefield.

“Since we can’t possibly replicate actual battle scenario, this firepower demonstration has shown you some of the destructive effects of war.”

According to him, the battle innoculation has given the cadets foretaste of the experience as they go into the field as subalterns occupying junior leadership positions into the various theatre of operations within and outside the country.

The Commander stressed that the cadets were mentally and physically prepared to deal with contemporary security challenges such as insurgency; banditry, kidnapping, militancy and violent agitations among others.

“The Nigerian army in collaboration with the sister services and security agencies has the constitutional mandate to combat these threats to national security.

“Therefore, the passing out cadets fall in line with the vision of the Chief of Army Staff (COAS), Lt.-Gen. Faruk Yahays, which is: “To have a Professional Nigerian Army Ready to Accomplish Assigned Missions within a Joint Environment in  Defence of Nigeria.

“The NDA has provided you with all the necessary basic military skills, character development and academic prowess to enable you to fit into this vision.

“What separate the chaff from the grain is your attitude and how you will conduct yourselves to your chosen career hereafter.

“Irrrespective of the corps; you might be posted after your commissioning, you must all be prepare to be drafted at short notice to perform difficult and sometimes dangerous operations such as Counter-Terrorism and Counter-Insurgency (CTCOIN) operation, peace enforcement, peacekeeping and other operations in aid to civil authority.”

Olabanji tasked the cadets to always maintain physical fitness, mental alertness and stamina to be able to succeed, and applauded the commandant for extending the duration of the training for a period of three months.

“This initiative is well thought out and greatly improved the training quality which has been replicated in the output of today’s exercise.

“You must continue to indulge yourselves in activities that would enable you to further develop and maintain the desired cardiorespiratory endurance, muscular strength and flexibility to withstand the rigors of military operations.”

While congratulating the cadets for successful completion of the training, Olabanji charged them to be committed, focused, disciplined and level headed in the discharge of their duties.

“However, you must bear in mind that a race is never won until an athlete has crossed the finishing line,” he said.

The Commnder further commended Yahaya for his support to the army training schools including the NDA.

“Undoubtedly, the  endorsement of the Establishment Order for the creation of 37 NDA Demonstration Battalion coupled with the issue of fighting vehicles to the new unit would enhance the capacity of the academy to deliver realistic training to the cadets.”

Also speaking, Commandant of the Academy, Maj.-Gen. Ibrahim Manu-Yusuf, urged the cadets to place the nation above all other interest as well as apply the lesson learnt in discharging their duties.