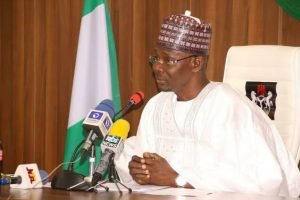 Governance and development issues is tangibly tied to economic wellbeing of the people. And this however required tact,strategy and innovative ideas. That must hinges on to policy consistency and reviews.
Fundamentally, the current government leadership in Nasarawa state humbly lead by His Excellency Engr AA Sule,clearly demonstrate. A novel usher to governance narrative in the state administrations process.
One of such tact is the deployment of Digital Economic Strategy. This comes as part of the road map documents Nasarawa State Economic Development Strategy (NEDS).
At the core of the document is Information and Communications,Science and Technology as well as Industrialization to drive the state economy.
Interestingly, digital economy is expected to play a bigger role in bolstering Nasarawa state to a high quality development. Accelerating digital transformation and upgrading both formal, informal and traditional sectors.
With the state bureaucracy operating on digital frequency’s.
The AA Sule administration plan to turned the state into a digital economy landscape.
To this end,the state established a digital innovative agencies in this respects.
To facilitates innovative digital technologies to enhance the integration into all other sectors of economic and social development of the state.
We acknowledge this trend has injecting new impetus into state economic growth.
Recently,the Nasarawa state government carefully set in motion a landmark project to broaden her digital economy drive.
With the ground breaking of the Nasarawa State Technology Village.
By this gesture the state government is positioning the state ahead into the digital economy mandates of the federal government digital economy master plan.
That is drive to establish a market system for data elements and see the digital transformation of industries reach a new level in Nigeria and beyond.
Moreso,as this federal government project see to, digital economy becomes more inclusive and with sound governance regulatory system for the people.
We salute the government of Nasarawa State in facilitating the growth of the digital economy in the state,with the understanding of vital importance to cultivating a new driving forces,to attract investors,generate employment and boost state IGRs.
It is imperatives to state here that digital economy alongside technologies incurs big data, cloud computing, and artificial intelligence.
Having the luxury of internet with fast and speeds, wide range of applications across industries and other economic sector’s integration with the real economy,
Nevertheless, we are of the opinion as a way forward suggests that.
More efforts are needed to make the projects visible across the 13 local government and 144 wards.
As the State’s intensified efforts to develop the digital economy, which will inject fresh impetus into its the economic growth need the support of all.
In addition the AA Sule administration must see this as legacy projects that need continuity regardless of political affiliation.
Moreso as this play out as a in-depth integration to reinforce Nasarawa State economy.
The digital economy has become a major driver of modern economy, leveraging on its advantages in empowering the youths population is key.
For us pushing forward Nasarawa state economics digitalization, is absolutely a right step by Governor Sule and his team.
We see the move as following the pertain, governments around the world having attached great significance to digitalisation.

The BBC in Nigeria : Between Reporting and Propagating Terror
9 min read

The BBC in Nigeria : Between Reporting and Propagating Terror