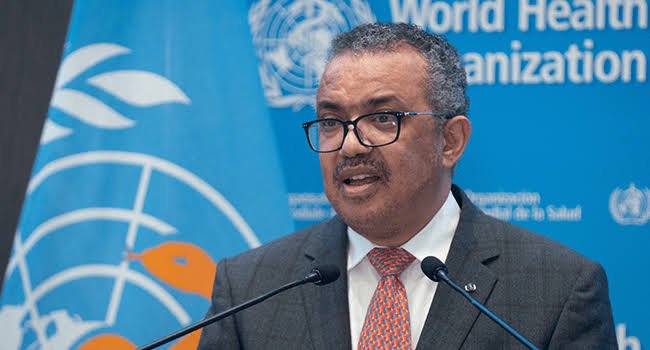 World Health Organisation (WHO) on Thursday renewed its call for vaccine equity and solidarity to defeat COVID-19 pandemic as the highest number of  cases were reported last week across the globe.

WHO Director-General, Tedros Ghebreyesus, told journalists in Geneva at his first press briefing in 2022 that the dawn of a new year offered an opportunity to renew collective response to a shared threat.

According to WHO latest weekly epidemiological report on COVID-19, published on Thursday, the number of cases increased at a global level by 71 per cent over the past seven days with some 9.5 million cases reported.

“I hope global leaders who have shown such resolve in protecting their own populations will extend that resolve, to make sure that the whole world is safe and protected.”

Ghebreyesus described vaccine inequity as “a killer of people and jobs”, which is also undermining global economic recovery. Low vaccination rates have also created the perfect conditions for virus variants to emerge.

He said the “tsunami” of cases has been overwhelming health systems across the world.

“While Omicron does appear to be less severe compared to Delta, especially in those vaccinated, it does not mean it should be categorised as ‘mild’,” he cautioned.

Although first-generation vaccines may not stop all COVID-19 infections and transmission, the director general stressed that they remain highly effective in reducing hospitalisations and deaths.

WHO has been advocating for countries to vaccinate 70 per cent of their populations by the middle of 2022. Ghebreyesus warned that at the current pace, some 109 countries could miss this target.

“The essence of the disparity is that some countries are moving toward vaccinating citizens a fourth time, while others haven’t even had enough regular supply to vaccinate their health workers and those at most risk,” he said.

“Booster after booster in a small number of countries will not end a pandemic while billions remain completely unprotected.”

According to him, the world can end vaccine inequity firstly by effectively sharing the doses that are being produced.

“Second, let’s take a ‘never again’ approach to pandemic preparedness and vaccine manufacturing so that as soon as the next generation of COVID-19 vaccines become available, they are produced equitably and countries don’t have to beg for scarce resources,” he advised.

For its part, WHO will continue to invest in vaccine manufacturing hubs and work with any and all manufacturers willing to share know-how, technology and licenses.

He was encouraged by some of the vaccines currently undergoing trial whose makers have already committed to waiving patents and sharing licenses, technology and know-how.

He also appealed for investment in public health and health systems, including to ensure strong surveillance and adequate testing, and workers who are supported and protected.

The WHO chief further called on people across the world to demand that governments and pharmaceutical companies share health tools globally to bring an end to the pandemic.

According to him, no place is the message of equity more true than in countries or regions dealing with humanitarian crises and conflict zones.

WHO is on the ground in these locations, reaching people with aid and supplies.

In Afghanistan, he said that until recently, over three quarters of health facilities had reported stock-outs of essential medicines, while there was also a threat to keeping health workers on the job.

As of December, over 2,300 health facilities had received new supplies. Additionally, 25,000 health workers have been paid, ensuring the functionality of 96 per cent of the country’s health system, through a joint effort between WHO and sister agency, the UN Children’s Fund (UNICEF).

In war-torn northern Ethiopia, WHO dispatched some 14 metric tonnes of medical supplies to Afar, and another 70 metric tonnes to Amhara last month.

However, the agency has not been permitted to deliver supplies to the crisis-wracked Tigray region since mid-July, despite repeated requests.