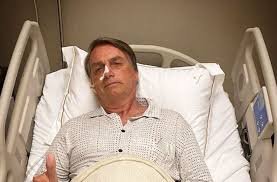 Brazilian President, Jair Bolsonaro, was taken to hospital in São Paulo on Monday with a suspected intestinal blockage.

The 66-year-old was admitted for treatment after complaining of “abdominal discomfort,” the government said in a statement on Tuesday.

According to the g1 news website, he was flown to the hospital from Santa Catarina, where he was holidaying on the southern coast of Brazil.

In an updated report late Monday citing the hospital, the government said the president was showing improvement after a nasal tube was inserted.

According to the report, he no longer has fever nor abdominal pain again, he was seen taking a short walk in the corridors of the hospital.

“It is not yet clear if more treatment is necessary.”

The right-wing populist politician was diagnosed with an intestinal blockage back in July, after which he spent several days in a São Paulo hospital.

This time around, Bolsonaro’s doctor, Antônio Luiz Macedo, interrupted his own holiday in the Bahamas to return to Brazil to treat the president, g1 reported.

Macedo operated on Bolsonaro after a knife attack during the 2018 election campaign that left him in a critical condition.

At the campaign event in September 2018, a mentally ill man stabbed Bolsonaro, seriously damaging his abdomen.

The former army captain continued campaigning from hospital and won the presidential election a month later.

Bolsonaro was forced to undergo several operations when he took office in early 2019, including surgery to repair his intestinal tract.