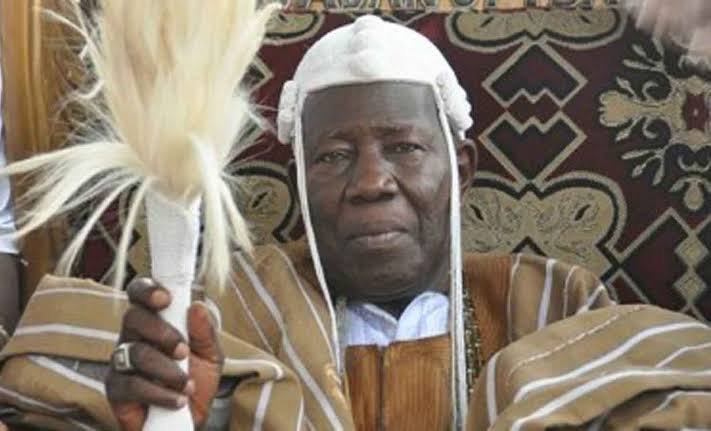 The All Progressives Congress (APC) National Leader, Sen. Bola Tinubu, has described the death of Olubadan of Ibadanland, Oba Adetunji Saliu, Aje Ogungunniso 1, as a big loss for Oyo state and the Yoruba race.

Also, Gov. Oluwarotimi Akeredolu of Ondo State and Chairman, South West Governors Forum, has said that he received the news of the transition of Oba Saliu Adetunji, the Olubadan of Ibadan, with shock.

In separate condolence messages by their media aides issued on Sunday, Tinubu and Akeredolu conveyed their condolences to Gov. Seyi Makinde of Oyo State, the government and people of  the state and in particular the family of the deceased and indigenes of Ibadanland.

The News Agency of Nigeria (NAN) reports that the late oba died in the early hours of Sunday at the University College Hospital, Ibadan, Oyo State at 93 years and his remains has been buried in accordance with Islamic rites.

NAN reports that the death of the late Olubadan is coming barely three weeks after the demise of another foremost traditional ruler in the state, the Soun of Ogbomoso, Oba Jimoh Oyewumi, Ajagungbade 111.

Tinubu who expressed his sadness over the late king’s death however, said that he was extremely grateful to God that the deceased passed on at a ripe age of 93.

The APC leader described the deceased as a sage and “a symbol of unruffled dignity” adding that he was humble, humane, mature, calm and decent,

The former Lagos governor said: this demise has robbed the state and ditto Nigeria of his wisdom and wise counsel.

“He never withheld his deep insights and rich perspectives from those who sought his guidance.

“This a big loss for the state and Yoruba race and it truly rankles as the death is coming shortly after the passing of another top ranking traditional ruler in Yorubaland and precisely in Oyo State.

“Before he mounted the throne, Oba Adetunji had made his name as a successful businessman.

“He was a music and entertainment promoter who contributed a lot to uplift the careers of many top musicians in the land, thus contributing his quota to the growth of our country’s economy.

“On the throne, the late Olubadan worked assiduously for peace and stability of not only Ibadanland, Oyo State and Yorubaland, but also the entire country.

“He superintended over the ancient city with even-handedness. I had a close personal relationship with Kabiyesi and I will deeply miss him.

My condolences to his family, particularly the oloris, mogajis and princes.

“May God Almighty comfort them and may the gentle soul of Oba Adetunji rest in perfect peace,” Tinubu prayed.

In his condolence message, Akeredolu said in spite of Oba Adetunji’s old age, he was a valuable asset, not only to the people of Ibadan but to the entire Yoruba race.

The governor said that the late traditional ruler did his best for the development of Ibadanland.

“Oba Saliu Akanmu Adetunji was, undoubtedly, committed to the progress and peace of Ibadanland. He was a traditional ruler whose reign witnessed tremendous development in Ibadanland.

“Yet, his transition is another tragedy for us in Yoruba land. This loss, coming shortly after the demise of Soun of Ogbomoso, is a big blow dealt on our traditional stool in Yoruba land

“As a people with culture and tradition, we believe that Oba Adetunji has gone to be with his forefathers. He has played his part and only his legacies will forever speak for him.

“He will be remembered for his firm stands. His principles and love for his people will be his enduring legacies. He was royalty with a difference.” the governor said.

Akeredolu condoled with the monarch’s immediate family, while praying that God would give them the fortitude to bear the loss.