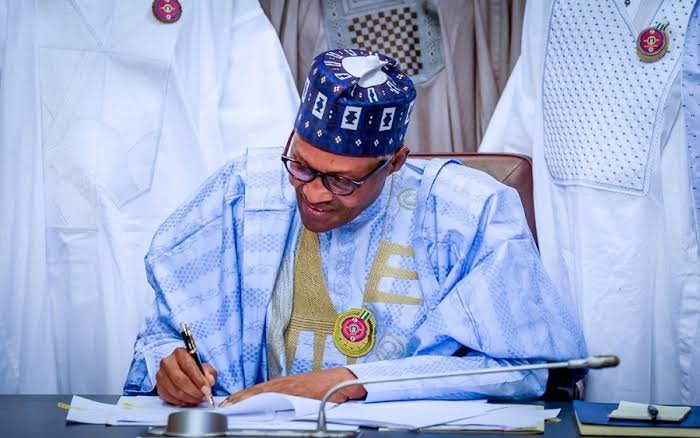 President Muhammadu Buhari has signed the 2022 Appropriation Bill into law.

The News Agency of Nigeria (NAN) reports that the event was done at the newly renovated Council Chamber of the Presidential Villa, Abuja, on Friday.

It was witnessed by Senate President Ahmed Lawan and Speaker of the House of Representatives Femi Gbajabiamila.

Others at the chamber include Secretary to the Government of the Federation Boss Mustapha, some cabinet members as well as principal officers of the national assembly.

NAN observed that the senate president, speaker, SGF and the Minister of Finance, Budget and National Planning,  Dr Zainab Ahmed joined the president as he signed the 2022 appropriation bill, titled Budget of Growth and Sustainability.

The president thanked the leadership of the NASS for meeting the deadline of maintaining Federal Government’s one-year budget cycle of January to December.

He expressed the hope that the existing cordial relationship between the Executive and legislature would be sustained for the general good of the country.

Buhari, however, expressed reservations over some changes effected into the original 2022 appropriation bill he presented to the NASS for approval, describing such actions as worrisome.

The president stated that he only signed the budget into law to enable its implementation from Jan. 1, 2022, saying he would soon seek for amendments of some provisions of the budget when the NASS resumed session in 2022.

The National Assembly raised the total 2022 budget figure from the proposed N16.391 trillion to N17.126 trillion.