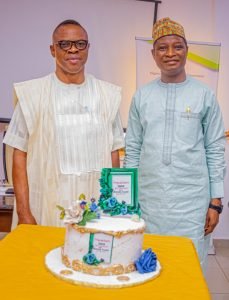 The Executive Secretary, Nigerian Christian Pilgrim Commission, Rev Dr Yakubu Pam has urged the staff of the Commission to shun the spirit of pull down syndrome and focus on things that would promote the interest of the Commission. He made this disclosure during the send forth ceremony of the Commission’s Head of the Internal Unit, Mr Essiet Bassey who had just retired from the Civil Service after attaining the mandatory 35 years in Service.

In the words of the NCPC boss,” Lets look at the way we operate and lets do things that will promote the interest of the Commission”.
He emphasized the need for staff to learn to live like a family.
The NCPC helmsman further urged staff of the Commission to be appreciative at all times and ensure they cooperate with the Management to move NCPC forward.
He explained that life after service should not be a time for the retiree to rest on his oars , rather should be a time to engage one,,s talent and mental capacity. He admonished the exiting Head of Internal Audit not to go home and sleep, rather , he should be alert in his thinking by engaging in worthwhile ventures .
Rev Pam opined that it may not matter how many times Mr Bassey would try in laying hands on something after service, but he should be determined to succeed and should never give up no matter the circumstances .
The NCPC Chief Executive described the retiring Head of Internal Audit as a very objective and disciplined officer who was loyal to the constituted authority.
Earlier, the Director of Administration, Mr Barnabas Ali said he enjoyed working with Mr Bassey while serving as Head of the Internal Audit Unit of the Commission.
He further affirmed that retirement from service is something every staff must experience as a public servant.
Mr Ali, thanked the staff for their solidarity and show of love which was overtly demonstrated by the turn out of staff at the send forth ceremony.
In his remarks, the celebrant thanked God for helping him to rise to the Directorate Cadre , especially when most of his contemporaries were not able to get to this level in service.
He recalled with nostalgia what he went through while carrying out his audit assignments; how he was given all sorts of names ,but he was not bothered but had to do what was right always.
He thanked the Executive Secretary for providing the enabling conducive environment for him to function optimally and effectively.
All the Directors of the Commission were physically present at the send forth ceremony and they all gave their Good will messages in honour of the celebrant
The highlight of the occasion was the cutting of cake and a special prayer for the celebrant by the Executive Secretary.
.