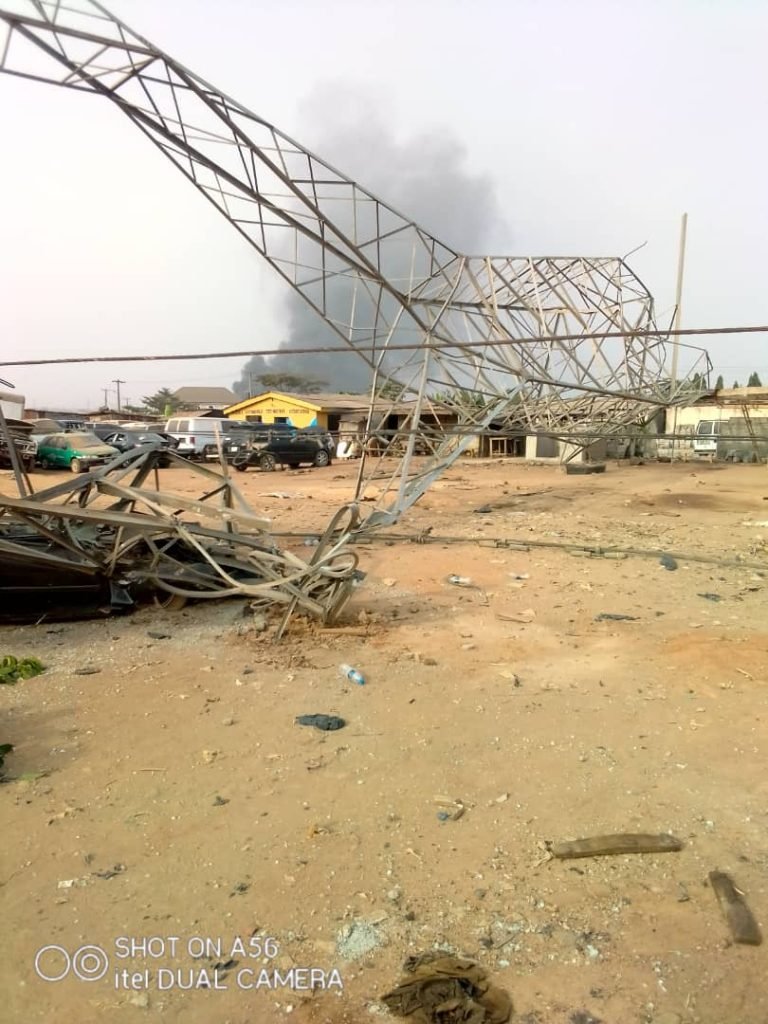 The Transmission Company of Nigeria (TCN) says it has restored power supply to areas affected by early morning explosion, which brought down its five 33KV Towers through the activities of vandals in Isheri area of Lagos.

Mr Sule Abdulaziz, the TCN Managing Director, made this known during his visit to the site of the incident on Friday evening in Lagos.

Abdulaziz said that TCN had energised the second 330KV Akangba-Ikeja West line, which before the fire incident, served as a redundant line in that axis, in keeping with TCN’s N-1 reliability criteria.

“The second 330KV line which trippled during the incident was patrolled by TCN engineers and certified okay before it was energised.

“The line II was energised at about 2.38 p.m on Friday and now wheels 121MW to the Akangba Transmission Substation.

“This means that areas under Ikeja Disco, whose supply were affected by the pipeline fire incident, will now have normal supply of electricity,” he said.

In view of the importance of transmission line redundancy, Abdulaziz said that TCN had already directed two contractors to mobilise to site and commence the reconstruction of the towers and 330KV line on Monday.

On the level of damage done to the towers, he condemned the act of vandalism by the vandals, adding that the damage to the towers were massive.

“The damage is very great; the transmission line is carrying 145 Megawatts and you can imagine on a whole day if you cannot transmit the power supply.

“Secondly, it will take a lot of money and time before the towers could be restored; so, it is a great loss to Nigerians,” he said.

The managing director reiterated the need for everyone to be part of the fight against vandalism of the nation’s assets.

“I am advising the vandals to stop destroying the nation’s assets; they should look out for legitimate work to do.

“Government property is everyone property; so by destroying the towers, you are taking us back. We are going to spend money which is not in the budget to repair this towers.

“If we want the nation to move forward, they should stop these activities,” he said.

The News Agency of Nigeria (NAN) reports that tragedy was averted on Friday at Isale-Odo, LASU Road in Alimosho Local Government Area of Lagos State, following the containment of a pipeline explosion.

Farinloye said the explosion was caused by the collapse of a 33KV line which occurred within the axis earlier in the day.

“The electricity cable collapse led to sparks and the sparks got to spilled petrol around the area which led to the pipeline gutting fire and a subsequent explosion.

NAN also reports that TCN confirmed the loss of five electricity towers as a result of the inferno caused by a vandalised pipeline along Isheri Olofin, off Igando-LASU Expressway.

The TCN General Manager, Public Affairs, Mrs Ndidi Mba, had in a statement in Abuja said that the development triggered a resistant pull on the high-tension towers along the line route causing five of them to collapse.

“The incident which is estimated to have occurred at about 12.29 a.m on Friday burnt a wide portion of the 330KV transmission line which wheels 145MW of bulk power to the Akangba Substation.

“The transmission towers affected are the two closest to the site of the incident and three across the Lagos Canal,” she said.