The investment and Securities Tribunal, IST, is now enjoying stable peace after series of strikes following disagreements between the labour union and the management.

The issues arising had consequently led to the ouster of the former Chairman, Mr Isiaka Idoko Akoh, by President Muhammadu Buhari in September 2019.

Akoh was sacked over the petition by members of the Amgamated Union of Public Corporation, Civil Service, Technical and Recreational Services Employees (AUPCTRE).

The union had petitioned the Federal Ministry of finance, the Economic and Financial Crimes Commission (EFCC), Independent Corrupt Practices and Other Related Offences Commission (ICPC), and the Presidential Initiative on Continues Audit (PICA), alleging that the tribunal was on the verge of collapse due to the level of financial misappropriation, maladministration and high level corruption by the then management of IST.

The Union also accused the former chairman of using youth corps members and seconded officers to occupy offices and positions meant for substantive staff members; denying them a chance at career progression.

The allegations were investigated; and Akoh was indicted by PICA.

Mr Jude Udunni was then appointed to replace the sacked Chairman on acting capacity.

Udunni during an interaction with newsmen in his office in Abuja on Thursday, said that among the challenges faced on his assumption of office, is paucity of funds.

He listed others to include lack of trust between management and staff, delay in staff promotion, inability to restore the organogram in order of seniority, tackling the issue of staff on secondment and union dues, among others. 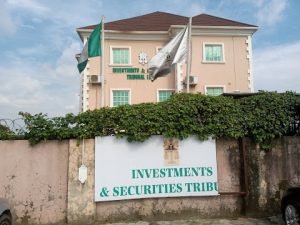 Udunni, who said he had spent the last four months trying to salvage the situation, however, thanked God that
trust was being restore in the system.

”Stakeholders and the supervising Unit have assisted in raising some funds for the tribunal, though that is inadequate for smooth running of the the tribunal,” he said.

The acting Chairman said though there was still the issue of complete trust between the labour and IST management, a structure was already in place to restore confidence in the system and make progress.

Members of staff illegally posted out of their respective stations within and outside the states were back to their duty posts, he said.

He also said efforts were being made to gradually address genuine grievances of the union before the end of first quarter of this year.

Udunni, however, stressed that the current management under his watch, had zero tolerance for corruption, therefore, every effort would be made to motivate staff and ensure that they gave back their best to the tribunal, in order to restore confidence of all stakeholders in the capital market.

The Branch Chairman of AUPCTRE, IST,
Mr Ikechukwu Ugwu, commended the acting Chairman for the efforts he had so far put in to move the tribunal forward, but insisted that urgent steps towards addressing the union’s demands such as restoring check up dues and the issue of seconded staff should be addressed for lasting peace.