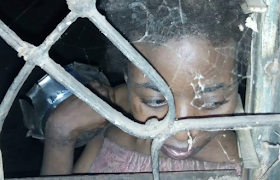 Kaduna State Government said it would take full responsibility of Hassana Sale, the woman rescued on Monday after she was locked up for two years by her brother.

Already, the mother of four has been admitted at the intensive care unit of Kaduna Psychiatric hospital.

The woman was rescued on Monday through the efforts of an NGO, Arridah Relief Foundation in Rigasa area of Kaduna.

Hajiya Hafsat Baba, the state Commissioner of Human Services and Social Development said in an interview with the News Agency of Nigeria (NAN) on Wednesday in Kaduna, that the government would take appropriate action against the suspects.

“Kaduna state government is now fully responsible for her medications, her welfare and her wellbeing up to the time she stabilizes.

“The major concern of the government is the health and the welfare of the victim.

“We have already deposited money to the psychiatric hospital and the ministry will be checking periodically and will be getting reports from the hospital.

“We will continue to look after Hassana as a government and we will also settle all the bills,” Baba said.

The commissioner said Gov. Nasiru El-Rufai has given instructions that the ministry should do what is necessary to stabilize the woman and follow up on her children.

“We will do follow up on the children to ensure that we collect them from the husband, know their welfare and schooling,” she added.

Baba assured that the state government would ensure that justice is done to Hassana.

“We are also concentrating on those people that locked her up and the case is already before the police in Riggasa, but will be transferred to CID headquarters for proper investigation.

“We will also do a follow up and ensure that we write report and refer the case to the Ministry of Justice for proper prosecution, because we cannot leave such matter to just go away like that, we have laws to protect the citizens of the State.”

The commissioner appreciated the foundation for ensuring the woman was freed, and for working with the ministry.

She called on parents to take full responsibility of their children, stressing that most parents had completely abandoned their responsibilities.

“We don’t listen to our children; when a lady is married and has problems the parents don’t want to listen to what is happening in her matrimonial home which is very wrong.

“We as parents must meet up our responsibilities, we can’t have children and throw them to the streets and believe that somebody will be there to discipline them, it’s absolutely very wrong (NAN)