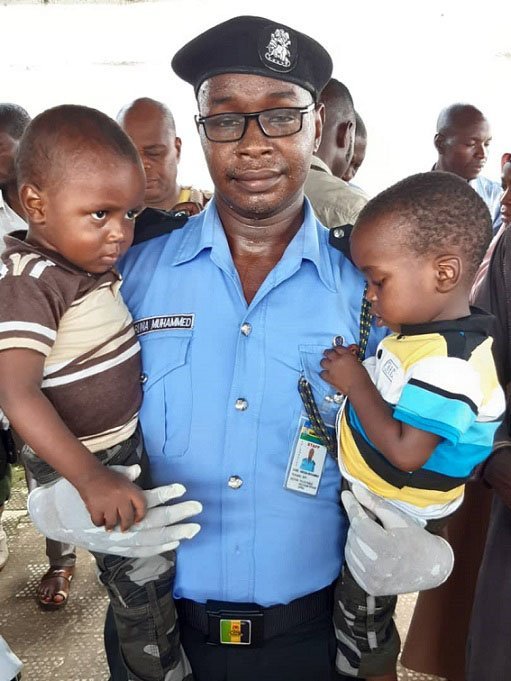 The Police in Anambra State on Wednesday handed over two kids kidnapped in Gombe State but rescued in Anambra to their parents.

This came few weeks after Nigeria Police, Kano State command reunited nine kids who were allegedly kidnapped and sold in Anambra State, with their parents. The children, aged between two and 10 years, were said to have been kidnapped from various locations within the state capital

The two kids, Mustapha Abdulazeez and Musa Yusuf, both aged two, were on October 20, stolen by a child theft syndicate and brought to the popular Tanzan Junction area of Onitsha.

Speaking to newsmen during the parade of the suspected abductors, one of the parents of children, Abdulaziz Suleman was full of thanks to God for enabling them see their children again after 20 days in the kidnappers’ den.

Suleman, a tailor, said the rescue was facilitated through the aid of social media.

He said, “Our children were playing in their compound when they were kidnapped.

“One of our neighbours alerted us after he saw the pictures of the boys on facebook where they were rescued in Anambra.

“As soon as we confirmed they were our children, we quickly rushed down to the state to reclaim our children. When the children saw us they jumped and ran to us.”

Police spokesperson Haurana Mohammed said the children were kidnapped in Gombe State and rescued in Anambra State through intelligent network of security operatives in the state.

He said, “It would be recalled that on the 22/10/2019 at about 10:45am, following intelligence report Police detectives attached to Anambra State Command arrested three female suspects at Nkpor market/Tarzan junction in Idemili North Local Government Area of Anambra State.

“Preliminary investigation revealed that the children were stolen from Gombe by one Blessing Musa ‘f” on the 20/10/2019 and brought to her accomplices in Anambra State. Following the Public announcement by the Command on the 27/10/2019, parents of the two kids from Gombe State came to Awka and identified their children.

He said the children have since reunited with their parents and suspects handed over to Gombe State Police Command for further investigation and prosecution.

One of the suspects, Blessing John said she was in a bus with a lady whom she claimed told her she needed financial assistance to train her two children.

She said when she got to Onitsha she approached patience Opia to help her find somebody who would assist to train the children in school.