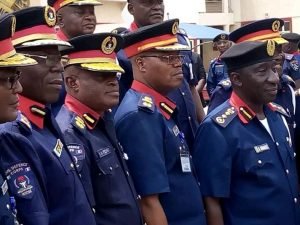 The Nigerian Senate has insisted that the proposed recruitment of 10,000 Nigerians into the Nigeria Security and Civil Defence Corps (NSCDC) would go on despite limited funds available for the paramilitary outfit.

Authorities of the NSCDC had complained that the 2020 budgetary provision for the corps can only accommodate 5,000 new employees as against the 10,000 earlier proposed by the government.

The complaint was laid before the National Assembly joint committee on interior, during the corps’ budget defence session held on Monday in Abuja.

However, Chairman of the committee, Senator Kassim Shettima, assured Nigerians that the parliament would ensure that the NSCDC continues with the initial plan of enlisting 10,000people considering the crucial role of the corps in protecting the civil populace and public infrastructure.

“The only way we can come in is to see how we can tinker with their budget to see that 10,000 Nigerians are actually employed,” Senator Shetima insisted.

Senator Shetima and most of the Lawmakers present at the session also commended the management of the NSCDC for their commitment and consistency in helping to safeguard Nigerian communities.

“Civil Defence compliments the efforts of the Nigerian Police Force and other sister security Agencies. I was opportuned to govern a state and I can assure you that the Civil Defence in Borno state is giving Police a run for their money,” he said.

According to the NSCDC, approval was given by government to recruit 10,000 Nigerians into the corps but 2.5 million applications were received from young Nigerians.

The corps further stated that only 1.5 million of the applicants are eligible for the recruitment to fill the 10,000 slots.

Commandant General of the NSCDC, Mr. Abdul Gana Mohammed also confirmed that only 1,000 slots are available for the officers cadre of the recruitment, while the remaining slots are for the rank and file.

He appreciated the Lawmakers for their political would in ensuring that the corps is allowed to execute the original proposal concerning the recruitment exercise.