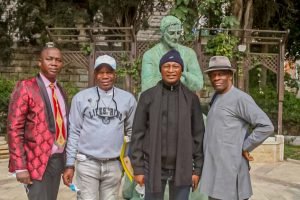 NCPC Boss urges Christians to be representatives of Christ

Rev. Yakubu Pam, Executive Secretary of the Nigerian Christian Pilgrim Commission,(NCPC) has called on Christians to be good representatives of Christ.

According to a statement by Godiva Mathew NCPC’s Information Officer 1,Pam gave the charge while addressing the Pilgrimage Managers On Wednesday in Nazareth, the North of Jerusalem.

The NCPC Boss admonished Christians to strive to do what is good at all times.

According to him, when you have a good heart, it will be difficult for someone to destroy you.

He said that Christians should be good to everybody, even those who are not good to you.

He added that, it is possible to have a good heart for people, regardless of what they think about you, he further charged them not to allow the bad character of people change their good nature.

He encouraged them to be who God wants them to be.

The NCPC Boss visited the Holy Sites in Nazareth, Basilica of Annunciation in Nazareth, the Sea of Galilee and the Baptismal site in Jordan River.

He also inspected the Hotels where intending pilgrims would lodge during the Pilgrimage exercise.

Pam expressed his Joy of having to witness another pilgrimage in Israel since the pandemic that brought the activities of the whole world to a stand still.

He expressed his appreciation at the level of preparedness from the ground handlers and the hoteliers,adding that that was a way forward to a successful pilgrimage exercise.

Also on the holy trip are the State Executive Secretaries, representative of the office of the Secretary to the Government of the Federation (OSGF); Directors of NCPC and other staff of the Commission.