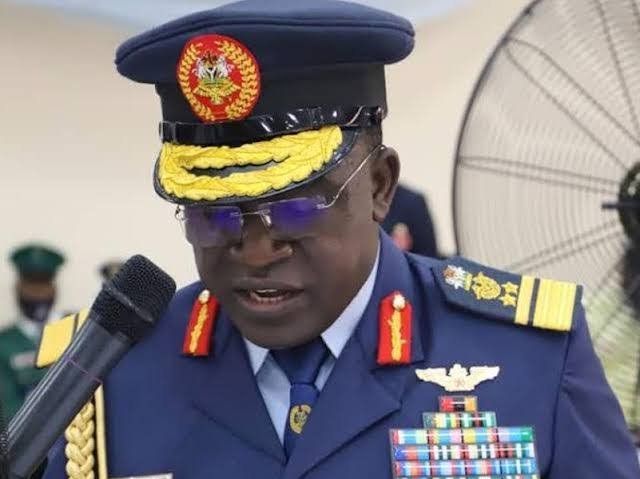 The Nigerian Air Force  (NAF), on Friday in Abuja, decorated 60 newly promoted senior officers and six non-commissioned officers to various ranks in the service.
The Chief of Air Staff (CAS), Air Marshal Oladayo Amao, who decorated the officers, said that the ceremony marked yet another milestone in the history of the service.
“As we all gathered here for the decoration ceremony of our newly-promoted officers of air ranks and senior non-commissioned officers who were granted concessional commission.
“It is a well-known fact that promotion is granted in recognition of hard work, commitment and diligence in most organisations, including the military.
“Hence, it viewed as a management tool which is used to enhance productivity and to equally motivate and inspire others to work harder.”
He noted further that in the military, the promotion process was usually a painstaking exercise that entailed the selection of the ‘best out of the best’ for elevation.
He added that promotion in the military was not just given to personnel for doing their jobs diligently only, rather it was also for demonstrating potentials to do more especially, at higher levels.
“The officers being decorated today have been found worthy of performing effectively at the enviable ranks of AVM, Air Commodore and Flt.-Lt., in the case of those granted concessional commission.”
The CAS, however, urged them to see their promotions as the beginning of another phase of their career in the service, which of course, comes with greater responsibilities.
“I am particularly elated because this ceremony is indicative that NAF now has more strategic and analytical minds in our pool of manpower resource to bring to bear their knowledge and experience on how to tackle nation’s security challenges.
“To those who have not benefitted from the promotion exercise, I enjoin you not to relent in your service to the our fatherland.
“Promotion is said to come from God; albeit hard work, excellence and professionalism are factors that determine which direction the pendulum swings.
“Please note that your hard work and services are highly appreciated.
“However, due to a number of factors, including vacancies, not all eligible personnel could be promoted.
“I therefore, urge you to continue to put in your best and be selfless in your service for the greater good of NAF and the country as a whole.”
Amao, however, expressed confidence that with continued hard work and dedication, in due time, their efforts would be rewarded as well.
The CAS also urged the newly promoted officers  to be committed in the nation’s quest towards enhancing and sustaining critical airpower capabilities required for joint force employment in pursuit of national security imperatives.
”We cannot afford to fall short of the expectations of the good people of Nigeria.
“I therefore, encourage you all to be guided by the words of a former U.S. Defence Secretary, Gen. James Mattis, who said “I don’t lose any sleep at night over the potential for failure. I cannot even spell the word”.
“Accordingly, as you embark on this new phase of your careers, please note that a much higher level of dedication to duty is required of you.
“You will also be required to continue to display exceptional integrity, selfless service and commitment to excellence, which will ensure that NAF records outstanding results.
“In every area of competence and translate to successes in the various theatres of operation with resultant improved security for our people across the country.”
Amao therefore, reminded them that  the nation and the service had been magnanimous to them, as such, it was expected of them to reciprocate the confidence reposed on them.
He appreciated the Minister of Defence, Retired Maj.-Gen. Bashir Magashi and all our other special guests for their untiring efforts towards making the service a highly professional one.
He also appreciated President Muhammadu Buhari, for his support which had enabled the service to more effectively and efficiently carry out its constitutional role towards ensuring a secure and more prosperous Nigeria.
The minister of defence, who doubled as the Special Guest of Honour, congratulated the officers, reminding them that promotion comes with greater responsibilities, as such, much was needed from them.
Magashi was represented by the Chief of the Defence Staff (CDS), Gen. Lucky Irabor.
The minister, however,  appreciated President Muhammadu Buhari, for his unflinching efforts towards making NAF a highly professional service as well as the entire armed forces.
NAN