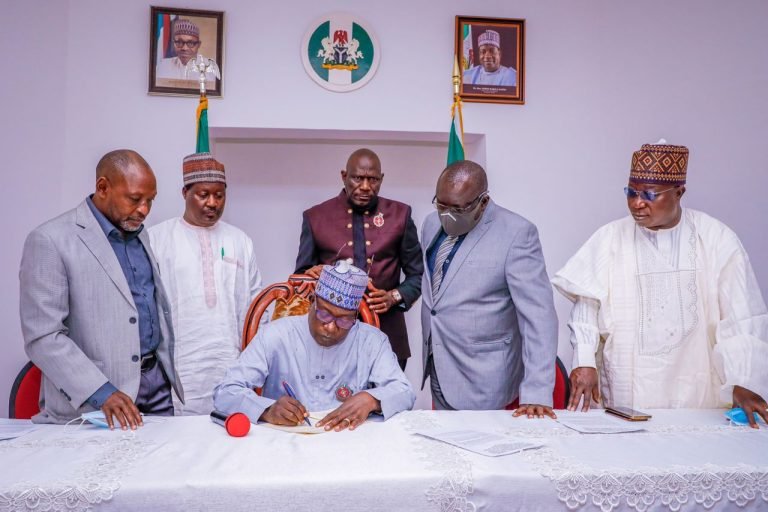 Gov. Simon Lalong of Plateau signed the state’s 2022 Appropriation Bill into law on Thursday in Jos.

He said at the signing that the “Budget of Economic Recovery and Consolidation of Inclusive Infrastructural Growth 2’’, was aimed at consolidating on his administration’s achievements.

Lalong said that the more than N106 Billion budget was aimed also at improving his stewardship toward accelerating socio-political and economic development of the state.

“We are determined to ensure the faithful implementation of this budget, which has been prepared with due consideration for all the parameters for generating the funds to execute it.

“We will work hard to actualise this budget and give quality services to our employers, the Plateau people,’’ he said.

Lalong, however, expressed dissatisfaction about the revenue generating capacity of the state in spite of efforts to boost it.

He said revenue sources such as Public Private Partnerships and Build Operate and Transfer models would be explored to execute projects in the budget.

He assured that the state government would continue to be prudent and transparent in the use of the state’s resources, saying Plateau was recognised for such attribute in South Korea on Dec. 14.

“We have seen some of the fruits of our efforts with the recent award won by Plateau at the Open Government Partnership (OGP) Awards.

“The award was given for Increasing Transparency and Accountability in Extractives, at the 2021 OGP Local Innovation Awards held in Seoul,’’ he said.

The governor assured also that the Executive would cooperate with the legislature to carry out its oversight mandate.

Lalong said that his administration would create 20,000 jobs for youths, saying “I have directed the relevant Ministries Department and Agencies to initiate the process that will ensure this goal is achieved.’’

Earlier, Mr Slyvester Wallangko, Commissioner for Budget and Economic Planning said that the budget would ensure completion of on-going projects and the initiation of new infrastructures.

The News Agency of Nigeria (NAN) reports that Gov. Lalong presented the 2022 budget to the Plateau House of Assembly on Oct. 21.